The Nikolai Kachanov Singers are kind of the Seal Team 6 of the Russian Chamber Chorus of New York. They're a smaller group and they have a wider mission of doing more modern music from around the world. Not exclusively modern, of course, that's not Nikolai's style. There's some ancient stuff in their repertoire as well as Messiaen and Arvo Part (and much younger composers). And they are freaking fantastic.

So. This concert. First of all, this venue is terrific sounding. St. Ignatius up on West End Avenue in Manhattan. The only downsides are that they have no piano and the heating is... well honestly the heating is a very weird joke as they have these two monstrous and incredibly loud heating units in the back of the church that look... like monsters. You can't see them in this picture.
The pipe organ is wonderful. You can actually hear what's going on around you. But no piano (and honestly I don't see how they could afford to keep a piano tuned due to the, er, vagaries of the heating and humidity situation.)

Ho-ly cats do they pour on the incense on Sundays. Holy cats. I mean, we walked in at 1pm and it was like being on the set of Blade Runner. Like OSHA would insist on respirators. Pretty though.

So the music had a fairly wide range of orchestration. One piece had a lute, one had a harp, one with a percussion section and a string quartet. So we're looking at a fairly wide dynamic range. Also, the chorus moved around a bit depending on the piece. For most pieces the chorus is upstage of that railing in the part of the church called, if I understand correctly, the "choir".

Other times the chorus was down on the steps and the percussionist was up in the "choir" with the string quartet down on the floor (where you can see the conductor in the rehearsal above.)
Oh, and a quartet of singers was sent off to a side chapel for one piece to be an "echo." I generally don't go chasing after things like that with microphones because the whole point is that they sound far away.

So the basic deal is that my tendency is to want to go relatively close with microphones to pick up the articulation and detail, and Nikolai is wont to put microphones further away because he doesn't want to hear individual voices. So for this concert I was thinking about the details and locations of various instruments and came up with another notion.

Probably 90% of the sound you want is a pair of nice supercarioid microphones in an X/Y pair in the first "sweet spot" you find as you listen to the chorus and start to walk backwards from the conductor's position. It's kind of funny and awesome that I have a conductor who will make that walk and ask for a particular mic placement. I think it's somewhat unusual to have a musical director that sophisticated in recording.

For this recording I wanted some options though. And those options involved having a couple bigger mics closer to the music. And it turned out that except for one piece I was wrong and Nikolai was right but not for the reason I expected. The mix and the blend are vastly better for almost all the music with the X/Y pair set three rows back. So what are those very far apart microphones good for?

When mixed in with the center X/Y pair those far apart microphones add a bit of widening to everything. Which, you know, makes intuitive sense now that I write it down but. Well yes then. And when I say "mixed in" I mean at least 10dB quieter than the center pair. When I recorded I set all the gains to record the sound on the stage at the same level on each recording track. So if somebody sang in the center of the stage, the meters on all four microphone channels would light up exactly the same.*

Actually, in the mix they're significantly lower than that even.  But I think that just the bit of sound we get from them, varying from piece-to-piece obviously, adds enough to make them worthwhile.


Now I made one exception to the general "don't move microphones" rule. That was for the piece with the lute. I scooched the NT-1's to where you can see them here for this one piece. And when I listened to the quick temp mixes I made today, I favored those mics over the ones about 30 feet away just because... because.

But now I'm all down with how I've got an 8-channel Zoom recorder, I may as well go crazy with microphones and track counts. Right? Right. I'm thinking a very wide modified Decca Tree. Because the fact is, if we don't like a mic placement -- we can just mute it in the mix.

*Yes, this is technically only true for a single point source and would fall apart as soon as someone changed position, but I had a chance to come up with an average and that's what I stuck with. Let's just pretend that all the microphones were getting the same amount of signal onto their respective tracks and leave it at that.

How Big is Your Drone?

I kind of like this very blue environment for a fairly post-apocalyptic city. I'm thinking I want a semi-apocalypse for our next movie. More "Stalker" than "Mad Max". Like there's a working society in walled cities but there's still a dangerous wasteland. With tele-k's and alien technology.
CG Aircraft Flyby from Steve Burg on Vimeo.

Also, Filmcity makes an even less expensive geared head than the one several posts below. Their DSLR Geared Head is $590.  I believe that other than the weight-bearing differences, the main difference between the DSLR version and the bigger one is the lack of multiple speeds on the cranks. But I will say that having two pan cranks is pretty nice.
at 10/21/2016 12:39:00 PM 2 comments:

Color film was built for white people. Here's what it did to dark skin.

Oh yes, the racism of film stock has been an open secret for years. Yet I think they missed the lede here. Primarily (as shown in the brief Amy Schumer snippet) it's light meters which are racist.

But that doesn't excuse Kodak at all, especially because of the iterative nature of what is labeled "normal" and, you know, white people.
The thing in the Vox video which talks about reds -- I think what they really mean is that the low-density resolution of reds were not so great in negative stocks. Or something like that. Maybe it's in release prints? Hmm... Yes, I'm going to guess that's what they mean. Because, as we all know, humans are all the same color, just with different amounts of saturation.
at 10/20/2016 09:12:00 PM No comments:

These directions for building your own Pip Boy are a little vague, but he does excellent work. The key is really the weathering isn't it?
I do feel my next movie needs a Pip-Boy of some kind.
Oh. We wrapped on Carbon Copy.

So I have 5 days to make five more 2' wide panels. And also do some routing on the device device.
Do you have any idea what I'm talking about? Of course not.
Now I will embark on a journey of discovery about turning bitmaps into vector graphics. Wish me luck.
at 10/08/2016 08:15:00 PM No comments:

You know you got some white male privilege in you when you watch a scene and realize that it's probably the only time you've seen three African American actresses in the same scene on television.
https://www.youtube.com/watch?v=K7cYExYeHpQ
The trope of The Detective, the Lieutenant, and the pain in the tuchus Internal Affairs Officer, is a dynamic we've seen before. But we just never get to see ALL THREE OF THOSE ROLES PLAYED BY BLACK WOMEN. Yeah, yeah, I know, we can find some earlier exceptions. But they're mightily rare on TV.
Sure, we have seen that dynamic before. The Detective, the Lieutenant, and the IA officer. But I can't think of a show where all three of those characters would be black... women. I mean. And they're not 18-year-old models. The majority of the black women are just that, ponderable women.


One thing that's really great about it is that anyone could be anything in that scenario. Like we can have a black woman play any sort of character we want because we're free of worrying about "What does that say that we put a black woman in that role?" You mean the role of a pain in the tuchus IA officer? Dramatically it's so dang freeing. 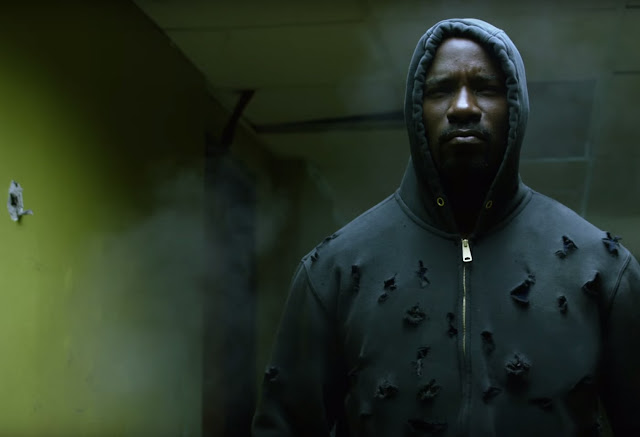 Are there dramatic problems with Luke Cage? Oh yes. Yes there are. Mostly in that our protagonist is so hesitant that everyone else is vastly more interesting.

I mean, it's like putting Hamlet and Macbeth in the same play. Hamlet is moping around and Macbeth has unseemed some dudes from nave to chops before the first scene.

This is the first day of the second round of reshoots on Carbon Copy.
I thought we would shoot most of everything on a 200mm lens. No no no. That lens was way too close. So I rout around in my bag (is that supposed to be "root"?) and I can't find the regular Panasonic lens. So...
Let me start again. I have a small collection of Canon S.S.C. lenses. They're really quite nice. And before I left for set this morning I was like "I should remember to bring those S.S.C. primes as well as the regular Panasonic lens because right now I just have this 200mm mounted on the camera."
Guess what I did not do? If you guessed "bring any lenses" then you are today's winner.
Joe Chapman, however, (unknown to me) has a phenomenal collection of very fast S.S.C. lenses. I had the FD to Micro 4/3rds adapter on the camera so it all went swimmingly. All of these images were taken with a 20mm... f2.8? Maybe?
A family emergency left us down one actor for this MOS sequence. So we re-wrote it last night that it could be played sans that one actor.