We don't tend to "test" our movies in any normal sort of way. What we will do, however, is show them to people for notes. The writer, the producer, the editor, the composer(s), all get to give notes. But these are people who have been, how shall we say, emotionally intimate with the picture.
So the biggest notes come from the distributor.
His particular notes were that the robot wasn't mechanical enough. More heavy robo-cop-esque. I made the robot more a "stealth" 'bot. But he's got to feel some weight. 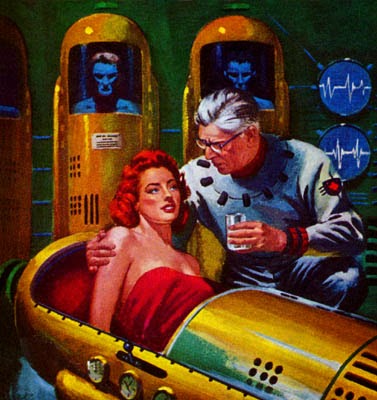 So we're going through and adding some more bigness to his footsteps. A bit of a whirr and a bit of a clank.
And yup, I had been blind to the movie needing that. It totally needed it. And now the movie is better for it.
There were also a couple scenes I thought we could get away without doing ADR on. Those scenes need ADR. I was really too close to the movie to tell on my own but those were some additional notes by our sales rep/distributor.
So we're organizing the ADR. I was really hoping to have whole acts done by the end of the weekend but that doesn't look like it's gonna go down. We'll see what we can get though.
at 6/18/2014 12:40:00 AM

Ah, looping is so much fun. Nothing Automatic about it. (unless you're paying studio time to get actual ADR, which I doubt! Us poor people have no money for that)

Nope. I'll be there for every minute of it. And then I'll have to edit and mix them all in. And I'll try to make them sound right.

Thanks for review, it was excellent and very informative.
thank you :)