So, I went out on a limb and a bought an Epiphone EB-0 even though I haven't sold my Squire 5-string Jazz bass yet.
I ordered it from Sweetwater but unfortunately it arrived with a gouge in it. 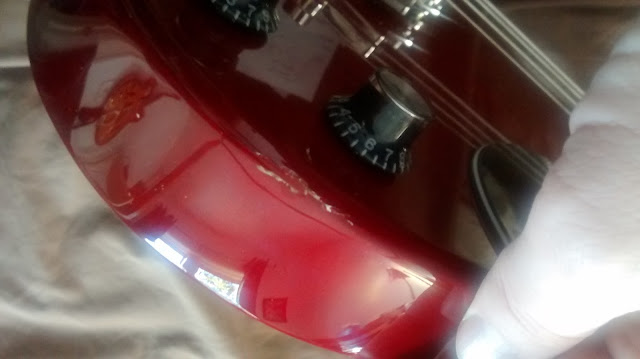 Now, the fact is that I'm likely to put some sort of nick or dent in the guitar within the first 20 hours or so of my owning it. But at least if that happens I'm the one who did it. Not a person at Gibson or Sweetwater or whatever (the packaging didn't look damaged, I suspect it was damaged while being placed in its box.)
So presumably I'm getting a new bass tomorrow via FedEx, along with a shipping label to send the broken one back.
Then I'll make a couple videos -- one with the bass stock, one with a new pickup, new bridge, new strings. I guess that's one video multiple scenes or something.

Email ThisBlogThis!Share to TwitterShare to FacebookShare to Pinterest
Labels: guitars