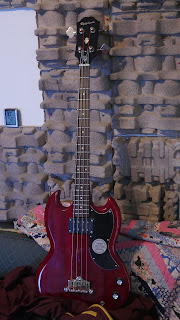 So I got an EB-0 bass. Here's my Conversation with Ethan about it. Well, it's what Ethan has to say about it at least.
§

EB-0, huh? Never been a big fan, but I suppose Jack Bruce's opinion ought to be worth something and he certainly seemed to like them. Or, at least, he did until he got a deal with Warwick....

Mike Watt likes 'em, too, but he modifies them, like, a LOT*, and only likes the ones from around 1963 to 1967. To me, they always balanced funny, the pickup placement made for a muddy tone and the necks were usually too skinny for me. On the other hand, Gibson's been making them, in some variant or other, since 1962 or so which means there's somebody out there who likes them enough to buy them.

*Watt typically removes the original pickup and covers the hole, then routs a new hole and mounts a humbucker right at the midpoint between the bridge and neck (like a P-bass). Sometimes he also adds a preamp, sometimes not. He only uses them live, preferring a long-scale bass for recording. Says he likes gigging the EB basses because of their light weight and short scale - easier on his hands and back now that he's "less young". It makes sense: he plays very long sets, still tours incessantly and is now, I believe, over 60. He's also a very physical player.
Normally, he records with a Moon J-Bass. I'm sure the vintage police would cringe at what he's doing to mid-'60s EB-0s and EB-3s, but he's making his living with these things and has no concern whatsoever about their vintage status. One of his faves during his fIREHOSE days was a '50s P-bass routed for Gibson Thunderbird pickups.

After all is said and done I think I don't even care either way about the DiMarzio pickups. The Epiphone EB-0 is just a very nice instrument out of the box. Update: Short version: I like the Thomastik-Infeld JF324 strings, the Hipshot bridge just doesn't work for me.
at 4/11/2016 07:34:00 PM

Email ThisBlogThis!Share to TwitterShare to FacebookShare to Pinterest
Labels: Conversations with Ethan, guitars