So I came up with a little ditty called Robot Christmas. And it amuses me. 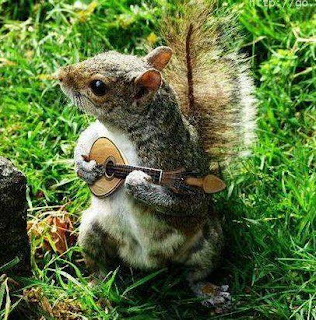 The second verse is a Christmas tree. But instead of balls and lights, there are little robots.
The robots eyes open. They glow RED. Then the robots come down off of the tree.

The Chorus is about all the human brains being placed in glass jars.

The third verse is about humans hiding from the robots like in Terminator. A single flower pokes up from the ground. But that flower grabs a human and they become a terrible human/monster creature like in John Carpenter's The Thing.

The end of it has the singer in a brain jar. There are Christmas trees everywhere. The robots are dancing.

At the very end a giant mouse -- a cross between a Tyrannosaurus Rex and a mouse -- crush the robot city.

The lyrics are thuswise:

The robots wait for the Winter Solstice
Crying out their metal hymns
Waiting for the time, the place
To rip apart our limbs.

Each ornament on my tree
Is a tiny robot waiting patiently
To climb down the piney biologic
And hunt and murder me.

Robot Christmas
Our last Christmas together
Not as slaves in brain jars
Dreaming about the weather.

The few of us who can
Hide from the robots through the Spring
But the biologic agents in the atmosphere
Turn us all into The Thing.

O! The robots are coming for Christmas this year. Yes. Indeed. Oh yes, quite. And now we shall be slaves in their brain jars. Dreaming for them. For robots cannot dream on their own. So we shall dream for them. Whatever they desire is our wont.

This is your bro, bro. In addition to vocal chords, what are the means by which the vocals are produced?

This was a single take using an Austin ribbon microphone through a Lindell mic preamp and a little compression with an ART tube compressor. In the mix the vocals are smacked with a whole lot of compression, with even more compression on the mix buss.
The mic was somewhat overhead (probably at eye level) looking down at my mouth.
Just yesterday I'd solo'ed the vocal track and comically there's the sounds of yowling cats all over it. I don't know why Winston decided to be so talky while I was recording it but it's really funny (I don't think you can hear it on the final mix.)