Production notes on Robot Revolution
by Andrew Bellware (Director)
The script, a screenplay by Steven J. Niles, is written as a POV tale of woe and hardship as a police officer and her Robot partner try to track down a terrorist who unleashes a nanobot virus in an apartment building.
The initial idea is that the movie is told in flashbacks, primarily from the robot's onboard camera. Which is a stunning idea that Steven came up with. But we didn’t do the entire movie in POV shots, we shot between POV and a more traditional “angle” of handheld camera. The intent is to keep the energy of the action and being “you are there” but with a somewhat heightened reality of a mobile camera. 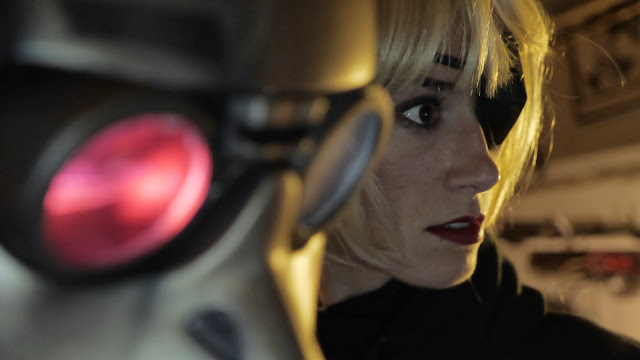 Virginia Logan as Constable Hawkins.
I tend to think of movies as either being “ensemble” pictures or “Alice In Wonderland” pictures. That meaning either we follow a single character or an ensemble throughout the movie. This particular movie has a strong point-of-view character in Constable Hawkins, played by Virginia Logan, but she ends up with a large gang of undesirables and miscreants whom she must save from the nanobot plague. So photographically we go (gently) between the literal point-of-view of her robot partner, and her subjective point-of-view. The idea of shooting the movie from the robot’s POV was one that was supposed to have made shooting it easier. But that was not always the case.
One tricky thing which the script called for was a rear-view mirror which our robot, ARGUS, looks into. And as the camera is supposed to be Argus’ eye, he’s supposed to see himself. I couldn’t think of a good practical way to do this shot until I saw a monitor for a vehicle backup camera. Of course, there aren’t rear-view mirrors in their vehicle, there’s a rear-facing camera and he sees himself in that. The irony is that the shot where that happens doesn’t make it into the final cut of the picture.
Another shot I wasn’t sure we could get did come through. At one point a huge and menacing robot walks down the hallway, stops, and deploys a cleaning brush. I was prepared to cut the cleaning brush from the shot but our visual effects supervisor, the extremely talented Ian Hubert came up with a cleaning brush! (As well as a 30mm cannon from the top of that robot in a later shot.) 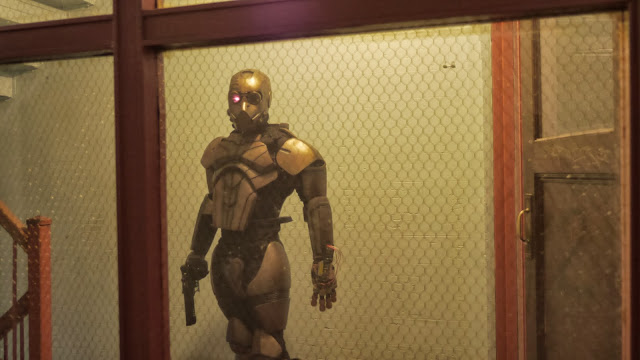 Jeff Wills as ARGUS
One issue with a full face-covering helmet is that typically means the actor inside cannot hear. Usually they cannot see either. So whenever Argus was on set, the actor needed a “babysitter” to chase after him and lead him “back to one” at the end of each take. 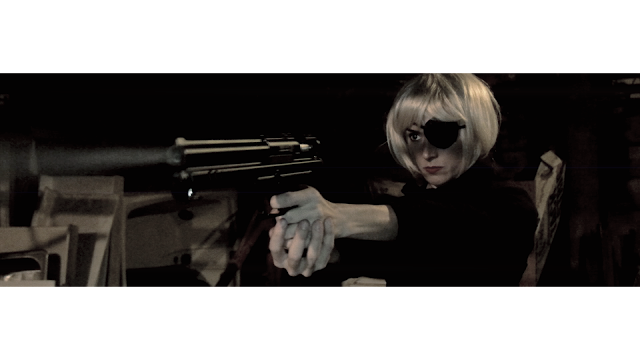 We tried, as much as possible, to use practical effects. Although most guns cycle faster than a film frame, we’re so used to seeing them rock back-and-forth that we did what we could to make our guns “flashy” yet safe. A liberal amount of baby powder on the inside of the barrel helped. 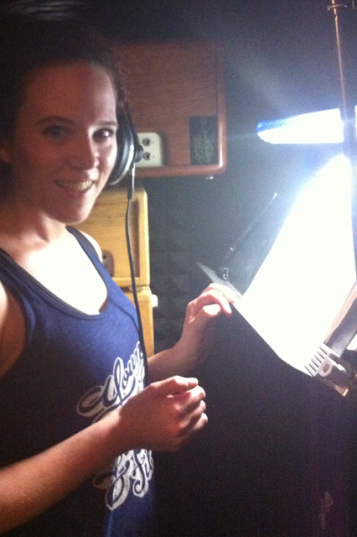 Sarah Schoofs recording ADR.
We had a couple noisy locations on this picture --  like the fact that the furnace had blown out and a temporary one was installed that was amazingly loud -- right next to where we needed to shoot. There was no option to turn off the furnace so we just ploughed ahead.
Today we get to solve some of those sound issues! We’re replacing dialog  using an Oktava 012 microphone -- the same mic we used for boom on set (although this movie was almost completely recorded with wireless lavalier microphones). And there's a bit of distance on the mic, it’s not right up on the actor’s face when re-recording the dialog. This tends to make the dialog “fit in” better with the rest of the movie.
One thing I’ve discovered about doing dialog replacement is that it seems that for most actors, seeing the picture while they record isn't terribly helpful. So we've abandoned having a picture monitor in the booth. I'll play the line three times and then go into record. No bloops or leader or anything. It’s much easier to get back into the space you were in as an actor if you just listen.
The visual effects were a fairly straightforward part of post-production. And except for a couple last-minute location changes the structure of the picture pretty followed what Steven J. Niles wrote.
For music, the Australian-based Hurry brothers created a rhythmic and driving score to maintain the tension through the picture. We experimented with a couple different “moods” for the ending of the picture before we decided on the arch-dark version we have now. At the last minute we flopped the open and end-title credits, which also changed the mood and worked well with the new ending. Now that the picture is completed I have to find a place to put all the robots parts!
at 2/18/2015 04:09:00 PM

It sounds like a lot of work. Is that what you're saying? Making movies is a lot of work, because I think I'm out if that's the case. DONE!