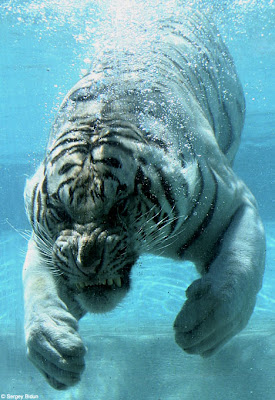 Mr. Ridiculous decided this weekend that the most important thing in the house was somehow in the fireplace. I don't know what he heard or decided was up there, but he spent all his time staring at, or roaming around in, the fireplace.
I went to pet the little Pudding - head and he was filthy with grey soot. His little feet, normally white, were now grey.
I wanted to wring his little neck.
But I didn't.
I did something much worse.
I gave the little fuzzy-butt a bath.
Well, that's not actually true. What really happened was I filled the bathtub with about an inch of water and set him down in it.
Four times.
As it turns out, all you can do is drop the cat into the tub and try to get his feet wet. You will not be actually washing the cat. Just dampening the cat.
The most disturbing part of the whole experience is that (at least in the case with this particular cat) he would look at me as though I hadn't thrown him in the tub, indeed that it wasn't my fault at all: "Get out of here, Man! There's water in the floor of this tub! Save yourselves!" is the look he gave me. Even after the fourth time he went in the tub. He made me feel guilty about it. I'd rather he was just annoyed in that cat-way he has when he's woken from a nap.
Oh, and believe me, throwing him into the tub 4 times was the limit.
And still, only his paws got wet.
I'm sure he likes to think of himself as a mighty Bengal tiger. But he's just a pudding head.
Albeit a much cleaner pudding head.
at 5/29/2007 12:52:00 PM