Dark Side of the Moon

Making a Gas Giant is 57 steps. 57.
It's actually a very good tutorial. 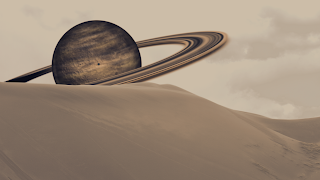 I didn't follow all the steps exactly though. Firstwise, Adobe changed its scripting language somewhat since that tutorial. You need to put in a semicolon between all kinds of expression stuff and the time variables. ;*-1 and suchlike.
The other thing is that it's actually our moon -- just that in the intervening time it's managed to turn all the way around. So that's the far side of the moon. And now it has rings. And two satellite moons of its own.
In the future, the world is rough.
at 5/29/2015 03:34:00 PM

Cool! Is it animated a little, or just a still image?

Thanks!
The clouds animate a little and the satellites pass over it. So there's a bit of movement.