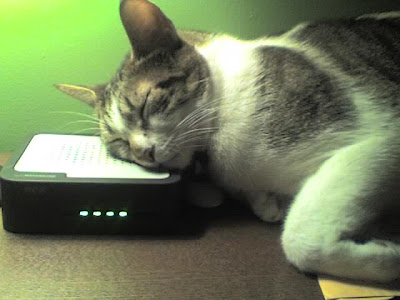 This is Jennifer Gordon Thomas' cat Thelonius Monkey. Monkey is resting on a cable modem.

The episode Father's Day has one of the most brilliant examples of "not speaking your subtext" in it. The idea of characters not speaking their subtext is a difficult one for a writer to get their head around, mostly because it involves the negative direction "Don't have the characters say what they're really thinking." How could you possibly illustrate such a thing?

Well, starting with the synopsis of this particular episode, written by Paul Cornell:

"Rose persuades The Doctor to take her back to 1987 to be with her father, Pete, when he's killed in a traffic accident. But Rose saves his life, damaging the timeline and allowing through creatures who are determined to kill anything in their path."

Pete, played by the wonderful Shaun Dingwall, realizes that Rose is his (grown) daughter. He plays this scene with a great deal of grace and precision where outside the church they're holed up in things are really bad. Fantastical monsters are attacking them. So his character does not protest too much at the equally fantastic idea that he's speaking to his daughter, grown up, while his same infant daughter is in the next room.

And right about here I'd use an example from the script but alas the New York Public Library doesn't have it. They do have the DVD, but there are like 22 "holds" on it. So my little essay on not writing subtext will have to wait until some other time.
at 2/10/2008 11:24:00 PM

Email ThisBlogThis!Share to TwitterShare to FacebookShare to Pinterest
Labels: Moviemaking in General, Otherwise

great. now monkey thinks he's a big deal because you put him on your blog. he asked me to put a rider in his contract...something to do with fresh mackerel and craft services...

In this week's issue of Backstage's hard copy Jean Schiffman has a whole article on subtext (page 12, Feb. 7-13). (I don't know why I wrote "whole article" as though "half an article" is possible, I guess it is..). Although the article is helping an actor create subtext, it's an interesting read. "Subtext is best revealed through behavior, not through displays of attitude."

I find it very satisfying as an actress to read such simplicity on the page that you know there's got to be volumes going on. Is it the writer giving license for the director and actor to explore the meaning? Most of my boldest choices come from exploring that subtext.

Good luck with the cold, my husband has it and he's turned in to a four year old. (I think I hear him calling "mommy!" now). Thanks to that cold I have a Kathleen Turner voice. Either that, or I have hit puberty.