My Guitar is Cooler Than Yours 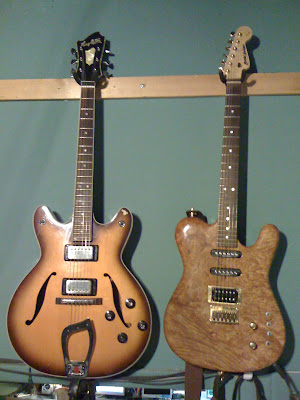 Today I went to visit a very old friend, Ethan Rosenblatt. I haven't actually seen Ethan for a long time, but we've known each other for about 25 years now so not seeing each other for 7 years is like about 10 minutes to most people.

Ethan and I had been corresponding about my guitar (the one on the right) a whole bunch lately. I was specifically not happy with the headstock. I just didn't like the way it looked. It has a Fender-ish headstock and I much prefer the look of the 3x3 "paddle" headstocks (like the nice Hagstrom one on the left). He offered to set it up if I bought a new neck for it. I took him up on the offer.

Wow. That was a good decision on my part.

Today he put the new neck on. He cut a bone nut for it and set up the guitar, adjusting the pickups and the intonation and the action.

And now? And now my guitar sounds freakin' amazing. I kind of have to re-learn to play it because its tonal palette is so wide now. I mean, it can sound like a Telecaster, or a Strat, or a Les Paul. Once it even sounded to Ethan like an archtop.

But more importantly it looks cool. 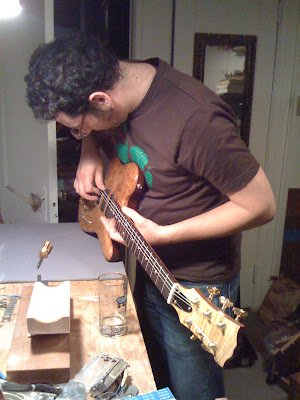 The scale on the conversion neck is like a Les Paul's, that is it's a bit shorter than a Fender-type guitar. But the body is like a Tele. Sort of. But with a humbucker in the bridge position. And with a creamy sweet setup and beautiful intonation. 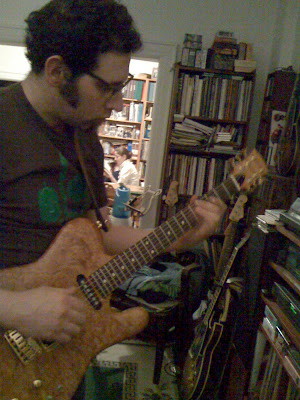 In fact, it's a totally unique guitar which is vastly cooler than your guitar.

That's just an objective fact, no disrespect intended. And now that you've seen pictures of it, you no doubt agree.

Here's a picture of Ethan setting up the guitar.

And another picture of him playing it (his lovely wife Liz is in the background, paying no attention to the boys in the living room rocking out.)

Did I mention how cool my guitar is? I'll put up more pictures of it tomorrow.