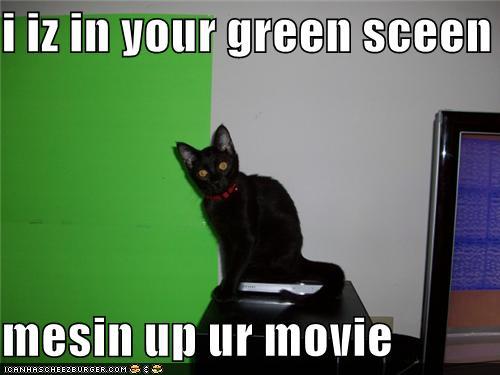 In fact, two bad things have been happening. One is that the camera shuts down every once in a while with a strange "cannot write to card" message. The other problem is... weirder. We have had dramatically more difficulty pulling decent mattes from blue and green screens using the hacked version of the camera.
This is completely counter intuitive. We've been lighting blue screens much better than in the past, and we're shooting at twice the data rate. So the mattes should be easier to pull, no?
But they're not. Maduka's day job is pulling clean mattes and he's been having trouble with the new footage too.
So, uh. Why?
I have no idea.
Now, further investigation has shown that indeed the trouble with the camera ceasing to record is primarily a matter of the pulldown removal in camera. Since we use Neoscene, we can just use the pulldown removal inside Neoscene. So hopefully that won't be a problem anymore.
But the data rate? Everyone on the Interwebs says the higher data rate is better. Honestly, it's just not making any difference to us. I can't see it. I see it in people's tests they post online, I don't see it when we shoot.
So what are we doing? We're going back to the stock camera. So there.
++++
And this brings me to my next point. The Interwebs has a lot of actual, real, and genuine experts on it. But very very few of them actually do high-production feature-film making. Indeed, arguably none of the technical experts on the web do.
What this means is that much of the advice one gets is from people who have a lot of commercial experience, or a lot of high-end (read: "expensive") feature experience. And the way those kinds of things are made is not always 100% helpful to little micro-studios like us.
For instance, I'm a big fan of the DV Rebel's Guide. It has a lot of useful stuff in it, even if at this point the dominant cameras have changed radically enough that some whole chapters have simply become archaic.
Other than the archaic stuff though, I have a couple other issues.
Look, I love Stu Maschwitz as much as the next man. But Stu, although he's worked on many high-end feature films is not a guerrilla feature film maker. He's a guerrilla filmmaker. And he's worked on a bunch of features, but not both at the same time.
What I'm saying here is that he really knows what he's talking about. But in order to make multiple features per year (which you really need to do in order to have a prayer at making a living at it) you frequently need to worry about doing things the faster way than the better way.
For instance: worrying about one's codec is focusing on really one of the last problems one has in movie production. Codecs are a big issue in the DV Rebel's Guide, and a big issue amongst the knowledgerati in the digital cinema world. But you know what? You have a whole bunch more things going wrong with your movie than the codec. Honestly we render a LOT in 8-bit too. Again, this is because rendering everything in a higher bit depth takes much more time and frequently doesn't work at all in Final Cut Pro (the computer just crashes) And doing all your color-grading in AfterEffects? That's a rich-man's way to do things. Loading an entire movie into AfterEffects is a major pain in the tuchus, no matter how you do it.
So we render in a low bit depth in Final Cut Pro. Which is exactly the "wrong" way to do it. But it works. And we can get a feature film out the door that way.
Anyway, we're abandoning the hacked GH1. I'll tell ya how that goes.
at 9/12/2011 04:28:00 PM

Yes, it's all about testing and finding out what works for you. But I have found a TON of useful advice over the years, and many times it has saved my ass.

But again, you gotta test it to find out if it's gonna work for you.

Like, one guy said you shouldn't bang your actresses until AFTER the shoot, and I have found that to be helpful advice. BEFORE or DURING seems to cause problems.

Oh, but back on subject: yeah, the trick is that most of these techniques aren't tested under feature-film-length stress.