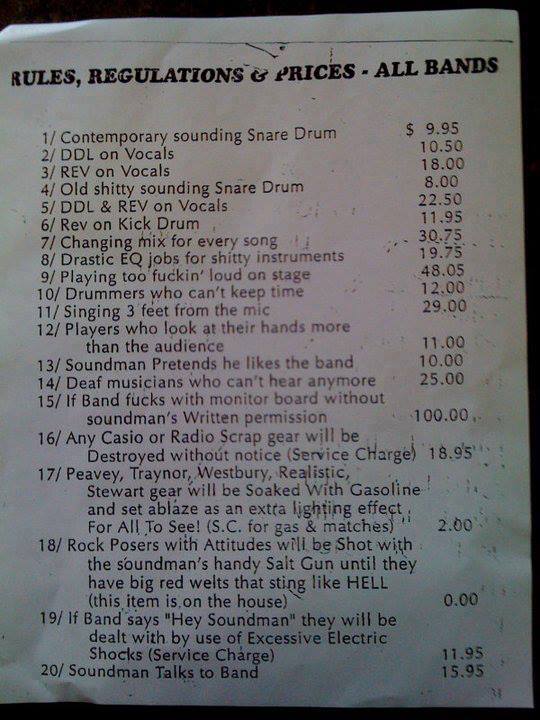 As more and more members of Diatomaceous Earth get better and better headphones, we're stuck with an ironic problem in rehearsals. Although we can hear one another's instruments better while playing, we can't hear one another talk.
Now I realize that for most bands, not hearing what the idiot horn player has to say is a plus. But for us it really would be nice to know when someone calls out chord changes and the like. Or even discuss the way we're supposed to come up to the coda. Or what-have-you. Sometimes jokes.
The JamHub we've got works great for us. And there are inputs for microphones. Now, if we all had headset microphones and cough switches we could have usable full-duplex talkback between all the musicians.
Right?

So thing: I own two pair of Sennheiser HD280's. And Ethan just got himself a pair. They are great, cheap, isolating headphones. But personally I don't find them that comfortable. And the low end sounds a tad "boxy" to me. And when you add a boom microphone (like the link above) you're spending around about $265 on them (with the appropriate connectors).
Okay, so that's over $1250 just to cover each member of the band. Ah. But we're not done. Because we would each need an on/off "cough" switch.  Think another $50.

Plus, you know, cabling. We're essentially doubling the amount of cabling we carry when adding a talkback system like that.
Now one might think "Hey, start slow, just get yourself one headset mic and go from there." Yeah. About that.
The person with the headset mic gains a lot of control over the band. Right now the band has no clear leader. I like it that way.
Hmm.
Now that I say that out loud I realize I'm making a hierarchical unilateral decision which systematically maintains a democracy. Uh. Yeah. So there's that.
What if we put a switch in the middle of the floor and a single omnidirectional microphone somewhere near it? That's good for everyone but the drummer, right? Well, it's not quite as practical as I'd like as it's difficult for us to all get to the center of the floor. And yes, it's impossible for the drummer to get to.
That brings me back to just thinking I should get myself a headset microphone and a single switch. Because, you know, ME. That would violate some of my earlier terms herein but I could also use the headset for recording commentary tracks.
I don't know. This is an issue only in that it's a bit of a pain to flip off headphones in order to hear what someone is saying or to hear someone say "You take the solo here" or whatever. Personally it means that I make more dramatic motions coming up on a change and I yell "hea!" a lot.
The other thing which just occurred to me is that when someone opens the contact on a microphone for talkback the drums will likely get loud. Er. Maybe not. Maybe not if the gain is such that you're practically kissing the mic. Uh. Maybe. In my head I imagine the snare becoming much louder in the headphone mix.
So like I said. I dunno.
at 8/31/2013 09:50:00 PM