Of things that do not exist yet, the Blackmagic Micro Cinema camera is the thing that speaks most to me. 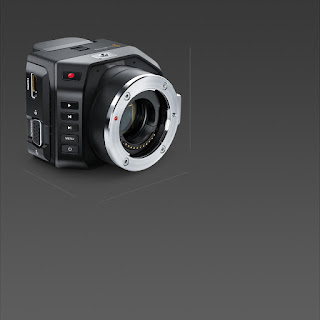 First of all, it's going to be cheap. Like a thousand dollars cheap.
Secondly, Chance Shirley has convinced me that 16mm is a better sized format for shooting because it's somewhat easier to focus than 35mm. Indeed, 35mm is a pain in the tuchus to focus.
Thirdwise, it's micro-four-thirds. I have a micro four thirds lens that's pretty fast. I'm totally down with that.
Quadranaically, there's HDMI video out. Oh man, the SDI on other Blackmagic cameras irked me. HDMI is so much easier.
On the Five Spot, it records to SD cards, not to weird stuff.
Sixly, it's got a global shutter and rolling shutter irritates me half to death.

The problems with it? Well for one it doesn't exist yet. Also, it's not 4K. Blackmagic is indeed coming out with a 4K Micro but it has no onboard recording. So as long as buyers don't care about "Ultra HD" we're good. The problem with 4K is that nobody can actually see it unless they sit with their face right up in the screen just like their moms told them not to do.

I feel like just as we got computers to get decent at rendering high-def and now we have to do 4K. Sigh. I feel HD really is the top resolution. Nobody really sees anything higher. I mean the boys down at THX say that film prints have an effective resolution of about 700 lines. So why all this resolution stuff? Ugh. Now I am complaining.

Email ThisBlogThis!Share to TwitterShare to FacebookShare to Pinterest
Labels: Standards