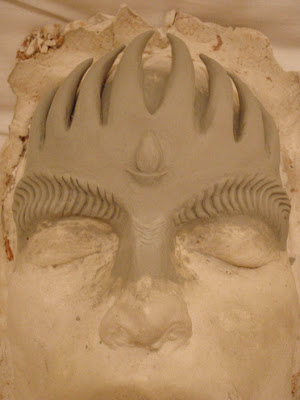 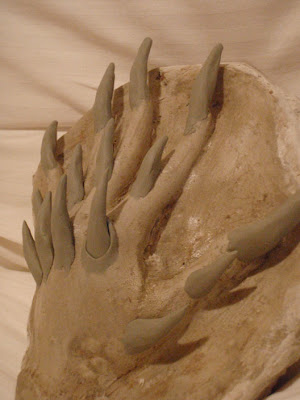 Well, it's busy. But fun. And not entirely impossible. I try once a week to get a day off. Today is that day, for instance. "Day off" might just mean that I work from home and have scheduled heavy computer-processing work to occur all day, but it's a day off to me! ;-)

1.
First of all, the new picture, The Shriven is a co-production between my company Pandora Machine and Brian Schiavo's company StrangewerksFilms. So we split up a lot of the work. (Sure, sometimes we do a lot of redundant work... Brian! ... ahem...) And as long as Brian isn't re-writing the schedule that works out fine. Brian knows much more about effects work and has assembled a team of talented yet sans-website-owning people.

Cristina Atkin is sculpting the pieces for the monsters our leads turn into. This is an enormous amount of work, taking weeks to make all the pieces (and duplicates of pieces) for each character. These images are of spikes and "brow piece" which are being molded using the cast of the actor's hand and head. (That's good, because I believe that our actor, Nadia el-Dassouki, is in Germany right now. ;-) Cristina has been enormously helpful -- she even came out and shemped a bit for us last weekend. Her work is really beautiful.

B.
Secondly, we're shooting primarily on weekends while scheduling and doing post-production on the weekdays. This makes everything much more do-able. The Shriven shoot is scheduled as a 20-day shoot. In other words, it's a standard low-budget shoot. That's about what they do for Movies-of-the-Week. For us, it's pretty luxurious. But we're spreading it out over 3 months.

Day off -- right now I'm working on three computers. One is in the middle of an 8-hour backup of all the working data for Solar Vengeance. One is rendering out audio and video files for Solar Vengeance. And this one I'm blogging on and writing dozens of emails back-and-forth to Brian regarding scheduling and suchly.
at 4/03/2008 11:45:00 AM

Email ThisBlogThis!Share to TwitterShare to FacebookShare to Pinterest
Labels: 0701, 0704