So I guess Only God Forgives isn't really a big Hollywood film. But it's beautiful in a sort of archaic (meaning, what, the 90's?) way. Each frame is very deliberately composed. Long takes. Long elegant dolly moves. 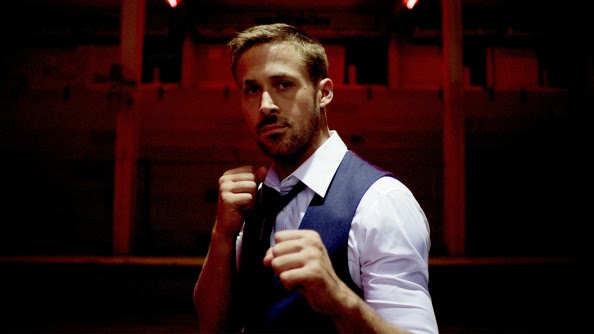 But it's the color which I found so striking. There are a lot of red, white, and blue compositions. I don't know if they were deliberately going for something in particular, like Ryan Gosling being in red for the beginning of the movie and then another color later. It seems like the movie itself goes through color changes rather than the colors being related to particular characters. So we go from red to a sort of daylight-clear but using architecture to frame, then going blue. Or maybe the red is, like, representative of the mother's stifling oppression, man. The movie is formal.
And the movie is slow. I mean it's like 2001 slow. And if the slowness doesn't make you think of 2001, the Penderecki-like score will certainly do the trick.
Cliff Martinez scored the picture. He's done a number of things I've really liked, like Solaris. I love the score in Only God Forgives. He's kind of the master of these moody sorts of scores which sound massive but which you can put dialog over.
Sometimes the Foley is comically kung-fu-movie-like. Some of the scenes are super delicate in their use of sound against score. It's not like the movie is all that literal. I mean, time certainly isn't linear. And there are certainly "choruses" of unblinking extras who just observe unemotionally.
It's a pretty striking picture. But I mean seriously. Where does he get that sword?
at 11/28/2013 01:23:00 AM

That director is THE most over-rated director ever. Too bad they can't find an editor to make his movies watchable.(Drive was one big long stare after another, but it's by far his most watchable movie)

Well it certainly lost money big-time. So that happened. ;-)