I have three movies sitting in post-production right now. That's less than awesome actually. Two of the movies have picture lock, or are close to it. But the one I have to get out right away has only just begun being edited.
§
We're not going to make any major changes in our post-production process just yet, but a couple things have come up of late. Final Cut Pro is, of course, becoming creaky. Old age is getting to it. I haven't heard any whispers of Apple updating version 7 or making version X actually, you know, work. And that leaves us with Premiere. Yeah, we could go Avid but, er, no. We won't.
The other thing is that Samplitude, which we use for audio, has cancelled its Apple port. So Samplitude is going to stay PC-only.
The other main programs we use are Blender (which is PC/Apple/Linux), and AfterEffects (PC/Mac).
You'll notice that if we jump off the Final Cut Pro bandwagon we won't need any Apple computers in our studio.
§
This dude, Stephan Bugaj, has a blog and he's been writing on the production and post-production process. For a nano-studio like ours some of the steps are fairly delusional but overall it's a fairly accurate overview of even how we deal with things. Things we don't typically do include an iterative process between sound editing and picture editing. We lock picture and then deal with sound. It's more old-fashioned the way we deal with it. 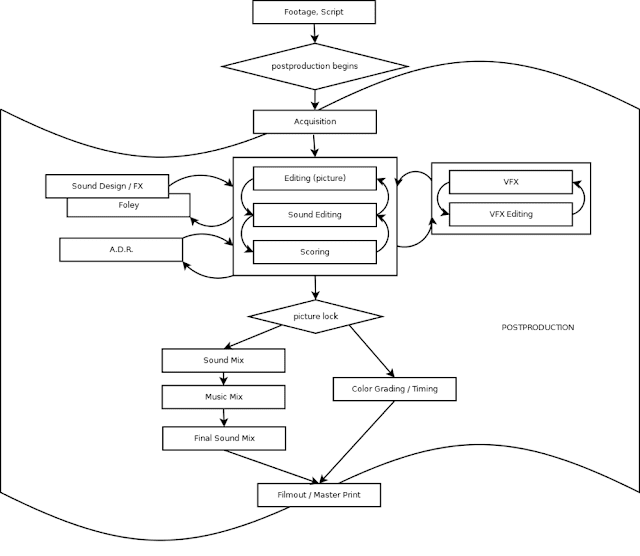 Have you thought about Sony Vegas Pro? It has a key overlay feature to mimic both Premier and Final Cut I believe.

Maybe check it out and evaluated it after you get your stuff canned and get back into your distributors good graces. ;)

I like Vegas. What doesn't work about it for me is that I need OMF export. Although I may be able to accept AAF export.
It would take some extensive testing in order to find out. ;-)

aatranslator is one work around.

What do you use OMF export for?

AaTranslator looks pretty cool.
We export to OMF in order to do our final audio in Samplitude. We could use AAF though too.
With AaTranslator it seems like we could export directly into Samplitude's "vip" format.