The Cat is Sitting on the Couch 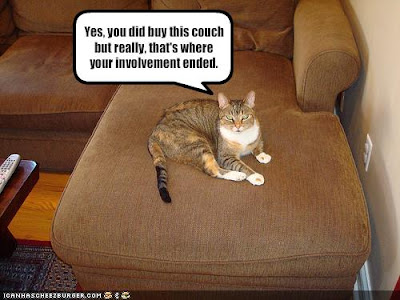 Here's a video on pre-production for post-production from Eric Escobar of the Orphanage. Bill sent this to me. I do as I'm told.

Interestingly the video starts out by saying to not fix things in post but Eric goes on to say that you should shoot silhouettes "flat" and create them in post.
************
From John August, this is about screenplay action and making it better. Personally, writing that's in a passive voice (which Josh James also talks about) is something which drives me nuts. I've blogged about that before. And oh look, John does a follow-up on that subject and even has the correct grammatical term for it.

No, this looks kind of like my cat but the only thing it has in common with Pushkin is the attitude.