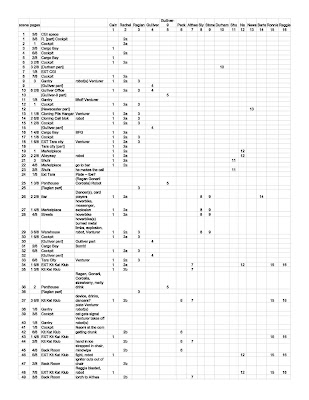 So I've finished "boarding" Clonehunter. Surprising things about the story frequently arise when you board a picture -- that is, to arrange all the scenes with all the characters and see who has how many scenes and how many days that translates into.

For instance, when I shot my first feature Hamlet, an agent tried to get second-billing for our Ophelia. But Ophelia is actually a relatively small part in that play even if we think of her as being the love-interest. The love story in the play (if it's there at all and no I'm not getting into that) isn't very important. Her brother Laertes has a vastly bigger part (if only because he lives longer.)

In the case of Clonehunter we find that Rachel is actually a slightly bigger part than Cain. Well if there's any argument about who's "point of view" most of this picture is from, that piece of information will make good ammunition. (But the action in the finale is clearly from Cain's POV. So I dunno. Ooh, I'm the director right? I better figure that one out pretty soon.)

Now I have to start putting all this together on a calendar. The trick is always what scenes will be shot where. I think that anytime the spaceship lands it'll have to be at my dad's metal shop. But there are other things we want to shoot in fabulous Gowanus. And I have zero idea where we're going to shoot a couple things. Those will need to be figured out.

Oh and if you're wondering about a couple names on this breakdown that you haven't seen before (having read the script), I named some characters who didn't have names before.

UPDATE: you'll noticed that I flipped the x and y axis of the board from what they usually are. Normally the rows are for characters and the columns are for scenes. But in Excel it's much easier to do it the other way 'round. Plus the added benefit is that you don't end up with a single sheet which is three feet long (wide). This is the way I'm going to board pictures from now on. 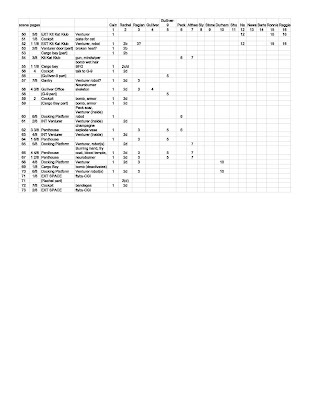