"Fears" and "Somebody Wrote Me" 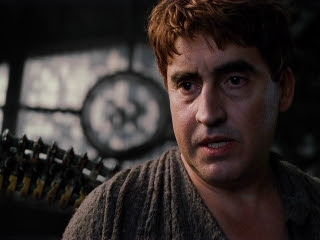 I keep being afraid I look like Alfred Molina. I mean, with different hair and less bushy eyebrows. But as I grow older, I think I just keep looking more like him.

Asking about our policy for screenplay submissions. He had a horror/comedy he'd completed. This is what I wrote back:

We don't have a policy on screenplay submissions. The fact is, we are a tiny tiny production company -- too small to actually have any kind of working capital to be regularly looking for screenplays to produce. If I wanted to be flippant I'd say something like "send the screenplay with a check for $150,000 and we'll produce it for you"!

But giving you a serious answer: we have films we're trying to produce over the next couple years (for much much less than $150,000 a piece -- heck, combined they won't cost that and we'd feel lucky if combined our distributors grossed that! ;-) And my preference is for sci-fi oriented material anyway.

You might try the Asylum ( www.theasylum.cc ) although I know that for some reason distributors generally don't like horror/comedies so producers are reluctant to make them. I think that there have been some horror/comedy movies which failed miserably which has everyone shying away from them.

In any case, good luck with your screenplay and check out the Asylum forums on their web site (and David Latt's MySpace page for his blog, which is very informative regarding the micro-budget studio "biz".)