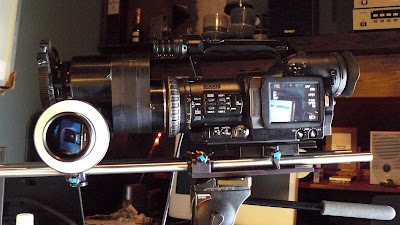 What's this giant and fantastically monstrous thing on the end of the camera?

It's a Letus 35 Flip Enhanced with a Redrock Micro followfocus and rails attached to a DVX100a owned by Blair. This Frankenstein will make our next movie look 35mm-ish. Here's a still of me. Notice the soft background*.
The adapter is surprisingly light. And it doesn't lose too much "light". The look it imparts is kinda dreamy and beautiful. It's really well made and the people are very nice. We've used the MovieTube before and were very happy with it (and the Zeiss lenses) but I'm feeling happier with the Letus35. Maybe it's because the Zeiss are just too "sharp" and the Canon are doing that thing with the stuff we all like. Also, the Letus is easier to mount on a tripod and certainly ain't as heavy as the MovieTube. Oh, and it's about $7000 less expensive**.
I still need some little bits and pieces to shim up the follow focus to my new Canon 35mm lenses.

Here's a picture of Melissa Riker from the camera. The size and compression of the capture are terrible and doesn't give justice to how good the image the adapter makes, but it gives you a notion of the kinda beautiful image we're going to get.

What should I be doing? Making up a CG shot list for Russell Porchia.

*That is, if you can see it. These stills came out small and computer monitors are notoriously dark (and I shot a bit underexposed 'cause I didn't have enough lights.)
**Update: I mean $9000 less expensive, although the MovieTube comes with it's own rails so maybe the Letus is just $8000 less expensive.
at 7/27/2007 09:23:00 PM