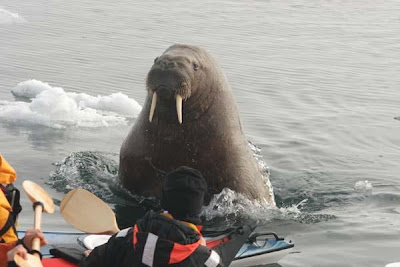 I'm Andrew Bellware, the director of Laura Schlachtmeyer's movie Angry Planet. She thought it might be good for me to write a few things to you about the character of Athena.

Athena is only a few years old. She was designed and built as a combat robot, extraordinarily strong, intelligent, knowledgeable, and expensive. She can feel much more than we -- she detects the subtle changes of pressure in an empty room as she walks through it, she sees a wider range of color and detects the continual change of color all around her (we tend to compensate for light color changes so we never see it.) She hears the blood pumping through the bodies of people and animals many meters away. She can listen to electrical and magnetic energy delivered by mechanical and electronic things. There is a lot going on and she doesn't "filter" it out like we do because she can listen and feel all of these things while talking to a person, or even fighting.

For a good long year after her inception date she did just as she was supposed to do - working for the Terran government as a part of Terran "Special Forces" but then one day she suddenly became sentient, self-aware. She was in the middle of a very violent combat operation where both sides - the Xik aliens and the Terrans - had virtually destroyed a peaceful planet. The Terrans had thrown together a suicide operation in order to take the planet (which of course had no real tactical or strategic importance - e'en so, it was garrisoned by the Xik). The operation was a disaster.

And as though from a dream she just woke up. She is a woman who was never a girl. She's more than a human in form and moving, but more than that in apprehension she is like a god. For a moment, she paused during the ongoing terrible destruction around her. Only another robot would have noticed the brief time where she regarded herself and regarded the world for the first time.

But there was no time to waste considering things. Her first instinct was the last instinct she had before she became self-aware. Her mission was to assassinate the Xik commander. Must complete the mission. Doing a quick logic-check she found no compelling reason not to complete her mission so she vaulted to the top of the abandoned shell of a half-destroyed building. Lifting her rifle she sighted the Xik commander (who was exactly where Terran intelligence said he'd be) and... couldn't pull the trigger. Fail-safe. The gun was inoperable -- to her.

There was no time to consider what that meant. Again, must complete the mission. She detected a heat signature of a Terran who was hiding from a garrison of Xik drones. The Terran could do the mission. And that's how she met West.

After West completed her mission suddenly there wasn't anything for her to do. Terran Special Forces had given her up for dead (as the Terrans assumed everyone would be killed anyway). So now she had this human -- a sticky, wet, hungry biologic -- and no clear directive. And she had time to do what she now could. She had time to think.

She knew the symptoms -- her inability to use a "missile" weapon, her unexpectedly violent breach into sentience. She was a special mutation, or variant of android, a "C" class. There were probably other things she was capable of doing that she didn't even know about. She could go back to Terran Special Forces, when she found a way off of Hellcat Prime. Many androids did.

A robot has, just as a kind of "mental furniture" the sum total of all extant works of human art and literature. And there was this dying planet she was on. And this human, West. And sometimes all these things, the smell of asphalt, the sensation of the small bits of soil on her boots, the acrid taste of burning oil or gasoline, the color of the moving sun as it rolled across the sky, the smell of the cleaning solution on West's uniform, and herself amongst all these things and thousands of years of feeling and thinking and... it would get to her. There was everything in the world, good and bad, horrible horrible things -- atrocities and violence -- but also so many beautiful things. Even on the dead world she presently inhabited. And sometimes thinking about these things (and she could never stop thinking) she would almost cry out and one day when this was happening in the bombed - out basement of a building West reached out and touched her.

The physical sensation of his hand on her shoulder was not so important, she could replicate that feeling and apply it to herself at will. But the feeling of someone reaching out to her -- that was something she hadn't even realized she could experience.

He's a troubled biological creature. And he's filled with a fascinating passion to do something. Athena is very capable of performing the tasks necessary in order to complete his "mission" and his desire, his need, seems so compelling to her that she agrees to go with him -- to help him steal a ship and to get him to Necrosis 6...
at 7/31/2007 12:11:00 PM