In our studio the preferred voiceover microphone is the Rode NT1A. We don't just like it because it's vastly cheaper than the AKG C12a (about 1/30th the cost) and it's much more durable, it also has a upper-mid "lift" that sounds better on most people with the exception of me and some female vocalists.

It normally lives in the booth but it (and its twin) can be in the aluminum case marked "Input Transducers." Yes, it's a poor-man's Neuman U87. There's no pad switch. There's no switch for polarity. It's always cardioid.
Which way to you talk into it? This is a question which you might ask. There's a little gold button which indicates the "front" of the mic that should face your mouth.
Here is the NT1A in its little "basket" shockmount. Note that right now only one of these baskets works right. The other one has a broken elastic.

Also, I frequently back the mic with one of those ubiquitous pieces of foam we have lying around. It helps deaden the booth just a bit.
There are two blue mic cables draped into the voiceover booth (what we like to call the Tardis). And look! They're conveniently labeled for your dining and dancing pleasure. Let's use the one labeled "MIC 1". 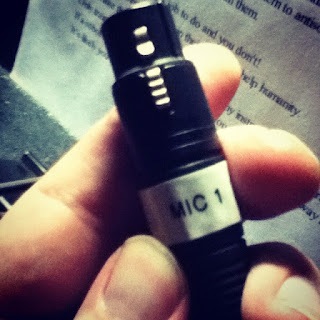 Now where does that signal go? Ah. Yes. It appears at our XLR patch bay. You'll see that "normally" the "MIC 1" is patched to "Pre/AD 1" and "MIC 2" is patched to "Pre/AD 2" using short XLR jumpers. On occasion something else is plugged into either "Pre/AD 1" or "Pre/AD 2". Feel free to unplug whatever that is (likely to be the power supply to the AKG C12a) and patch the feed from the booth instead.
Okay, now you have the patching correct -- it's time to set the gain on the preamp. That's the preamp right above the patch bay. First, make sure the "48V" button is on (and there's no light on it to tell you it's on). Then you have a big knob and a little one. Normally the big knob is at about 2 o'clock and the little one is turned as far clockwise as it'll go.
Lastwise is the settings on the A/D converter.
You don't want to touch the knobs on the left. But the selector that's third-from-the-left (2nd from the right) you do want to check. For most video stuff you'll want it set to 48kHz and not 44.1kHz. There are some rare instances where you might want 44.1 but those are mostly music-related. Set it to 48.

Email ThisBlogThis!Share to TwitterShare to FacebookShare to Pinterest
Labels: audio