I hate having blank-firing guns on set. I won't have live-firing guns on set at all.
The biggest problem for me is safety. When I'm behind the camera I know my ability to rationally determine when something is safe or not goes right out the window. Specifically it goes out the window through which I'm looking at everything — the lens of the camera.
So I hate blank-firing weapons. They're still dangerous. Flame and junk spit out the front of them. They can kill you. Let's go through all the things I hate about them.
So with the ability to add muzzle flashes in post, why would anyone use a blank weapon on set?
It's because CG muzzle flashes look like poop, that's why.
I can't quite figure out the reason for it.
Here are some real muzzle flashes from the movie Heat. Notice that even in a fairly reflective environment (sunglasses, car roof) the muzzle flash does not really light up the scene. There's some specular in the glasses and the roof, but it's not really affecting the exposure on his face that much. 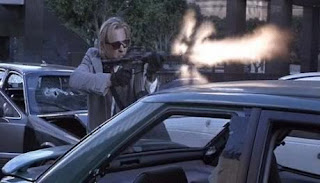 Notice too that the "classic" muzzle flash of the M16 is more distorted, with bigger holes in it than the typical stock-footage M16 muzzle flash. 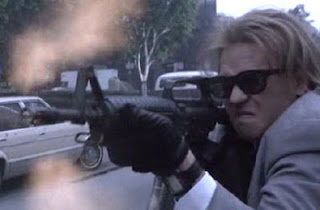 The other thing is that (at least it seems to me, not having actually fired one) that the .223 assault rifle does not actually drift or kick that much. Not as much as a handgun kicks certainly. Actually, here's a video.

I'm going to guess this video was shot at 29.97fps. That's going to be about the equivalent of a 60fps shutter. You'll notice that there's no muzzle flash at all. There's a bit of smoke which appears a couple feet ahead of the rifle. The kick the gun gives is very difficult to replicate "by hand". By that I mean it's hard to "pretend" that a rifle kicks like that if you're not actually shooting it.
+++++
So briefly I thought to myself, we need to get our guns to look better. And if I wanted to use blank-firing 3-shot-burst weapons, I really should just get a Class III gun license. Which is a major pain to do (but you actually need the full license even to own a blank-only firing machine gun because those are all made from actual machine guns and even though they've been disabled from having live rounds put in them the law still considers them machine guns.)
But if I did that, what would I do? Modify them so that they looked like futuristic space weapons? We're starting to talk about a lot of money when it comes to buying real guns and modifying them and getting licenses and... already I'm bored. I'd rather get an exoskeleton robot suit.
+++++
Nope. I'm not going to get an (additional) gun license. I'm going to figure out how to make fake muzzle flashes actually work. It may be making them less flash-y. I don't know yet. But if I can keep gunpowder off the set I'll be happier.
at 12/31/2012 01:48:00 PM

Laser and plasma weapons are the way to go when you do sci-fi. No kickback, no clips, and all you need is a prop man who can do electronic counters and a superbright LED at the muzzel of a modified bb or toygun with a gel on it to color it.

Yeah, you're right about that.
But no kick just doesn't look as cool. ;-)

The no-kick has be the #1 reason fake guns don't look right. You can create the muzzle flash as well as the light that hits everything from the flash, but you can't make someone do a convincing gun kick.

Make a fake gun that kicks, and then add muzzle flash and light and I'll bet it looks like a real gun.

PS: Blank guns are awesome. Everyone treats them like real guns, which is another reason the actors seem more convincing. They react to the BANG, the light, and it helps the scenes.

Yeah, a gun that would kick right -- or at least convincingly -- would do the trick.

Hi, I have perused a large portion of your posts. This post is likely where I got the most valuable data for my exploration. A debt of gratitude is in order for posting, perhaps we can see more on this. Are you mindful of whatever other sites on this subject. Miami Firearms Training