Rendezvous with Rama from Aaron Ross on Vimeo.

Here's a little sci-fi short based on Arthur C. Clark's Rendezvous With Rama. 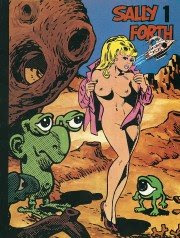 Did you know that Sally Forth was also a Armed Forces pinup comic from the late '60's and early '70's?
Wokka.
Bill Cunningham on the Weinstein's greenlighting 18 direct-to-video pictures. What's interesting to me? Blockbuster has already guaranteed space in their stores for the pictures. So that's how they can afford to greenlight those movies...
Our last couple of days of shooting have been almost entirely with the 35mm and the 85mm lenses. I haven't been using the 50mm even though it opens all the way up to a 1.4 (the 35mm is a 2.0 and the 85mm is a 1.8).
I feel like a real dummy because I was shooting and acidentally pushed a button on the side of the Panasonic HVX200 which put this little box in the middle of the screen, "magnifying" the center of the image. Duh. That's the magnifyer you use to help focus. And I think I've shot three features now totally forgetting that I had that tool to help.
Speaking of focus, I saw an episode of HBO's True Blood. Is it just me or is a tremendous amount of that show out-of-focus? Maybe it's just my parent's big screen TV but they seemed very casual about who was going to be in focus on a particular shot and who would be soft. Sometimes they settled somewhere in the middle.
Can you tell nobody has sent me a script yet? And that I'm not working on post because Maduka is on the picture edit?