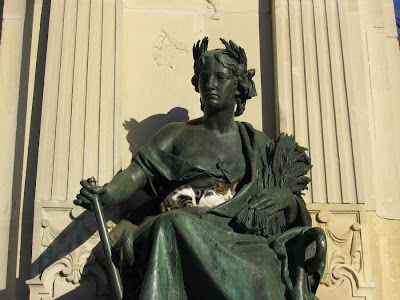 We have distribution for The Uprising. That doesn't mean we have sales, just that we have a sales rep. We just signed a contract today.
Halcyon has handled our last two pictures. They handle worldwide rights with the exception of North America. They go to the Cannes Film Market, the American Film Market, and they also fly around to other smaller film markets (Hong Kong, Berlin, etc.) I know for a fact that we've made more money through Halcyon from overseas sales than some pictures which had gotten theatrical distribution in North America. Halcyon is particularly fair in their business dealings.
Halcyon also makes cover art and the trailer. We've been very happy with the trailers they make. Ray Haboush at Halcyon knows the market* and knows how the cover art should look. Many buyers/distributors will change both the cover art and the name of the picture, but they still like to have some good ideas to start with and frequently they do use the cover art Ray makes up.
The American Film Market is coming up in early November. That means we have to have stills to get to them and we haven't been working that hard toward getting stills because we figured we'd be getting them on the last day of principal photography. The problem there is that we finish shooting on October 18th and Halcyon needs stills like... well... now.
So we'll probably schedule some extra "stills" days.
*Trailers for our kinds of pictures are cut for the buyers/distributors, not for the actual person going into a video store.
at 10/01/2008 02:16:00 AM