So I watched an episode of Face Off tonight. That's the SyFy "reality" show about makeup artists. I know one of the contestants, Anthony Pepe. We actually hired him to make exposed guts for our movie Pandora Machine.
In fact, we've used those guts on almost every movie we've made since then. Hmm... really he should have an IMDB credit on all those pictures, shouldn't he? 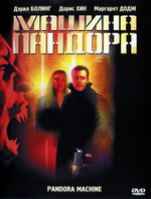 I worked with Anthony again when I was a sound mixer on The Attic. I recall him having a hard time on that picture -- as far as I could tell it was mostly because the director didn't really know what he did. In any case, I think I'm on the record for not thinking the director on that picture having any idea what anyone does. But that's another story.
+++++
Uh. We never sold Pandora Machine to any Russian-speaking territories. And I found this image on a Spanish-language site.

I hate most television, and I hate even more of reality television.

I dig this show, big time. Way cool. And I dig Anthony. I'd like to see him go far.

As I type this, I'm watching my DVRed episode from last night. Frank's a duzzo. How much longer until he gets toasted?

TV is funny -- it's changed a LOT since we were tykes. Some of it is, dare I say, actually good?
Structurally it's a freakin' nightmare. You think I'm a fascist about the Blake Snyder beat sheet? That's nothing compared to how you have to obey act structure for commercial breaks in TV.
Anthony is, I suppose I should have said, a genuinely nice guy.