So I'm a very very bad science fiction movie director. You'd think I'd watch every sci-fi movie as soon as it comes out. But I don't. In fact, I hadn't seen Repo Men 'till today. I'll tell you one thing. Repo Man was much better. A repo man spends his life getting into tense situations. This wasn't the best sequel.
Actually, Repo Men had a lot of potential. The theatrical version clocks in at 1:53 or some ridiculous time like that. You're asking yourself "did the movie have to be that long?" And no, the movie could have been 45 minutes shorter.
There were two "B" stories. You really gotta pick one and go with it. Me? I would have axed the wife and child subplot. They actually have zero impact on the story. Yes, I watched the movie 'till the very end. There was no need for them. 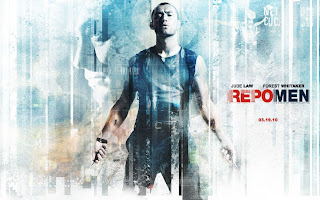 OK. So you got a guy who repossesses human organs for a living. So he's a "repo man" for hearts, lungs, what-have-you. What should be happening on page 20? We all know what happens on page 20. He becomes a runner. Oops. Sorry, I thought we were in Logan's Run for a moment there. What I meant was he gets an artificial heart which he can't make the payments on.
OK -- but we're like 40 minutes into the damn movie by the time that happens. And I'm not even listing that plot point as a "spoiler" because honestly, if you can't figure out that's what was going to happen in the movie you have to go back to movie watching school. Plus, it's on the DVD box.
But the plot went off in a lot of different, and unresolved, directions. There was even a moment where the big, bad, evil, boss suggested that the two main Repo Men go... freelance? Or something. So that they're hunting down the underground of people who have "past due" organs in their bodies and are trying to escape to somewhere their organs can't be repossessed. No no no no no. Do not have spurious dialog in your movie. Just don't. And keep the movie on track. That concept went nowhere. Maybe it was from an earlier draft of the screenplay. But the shooting screenplay needed about 50 pages ripped out of it.
Somebody needs Blake Snyder's Beat Sheet calculator. And I'd say the writers, the director, the editor, and most of all the damn producers of this movie are the ones who need it.
Don't get me started on the music choices.
Furthermore, why does he get into a knife fight with a dozen dudes when he has two perfectly serviceable sidearms sitting on the floor that he has to step over to get into the knife fight?
at 2/07/2011 12:36:00 AM

Libby and I just watched it for the first time, recently. I agree with you about the wife/kid "junk." The twist at the end was great. That knife fight was a complete rip-off of the famous scene in Oldboy.

What makes me so complainy about the movie is that it was so freaking close to being good.