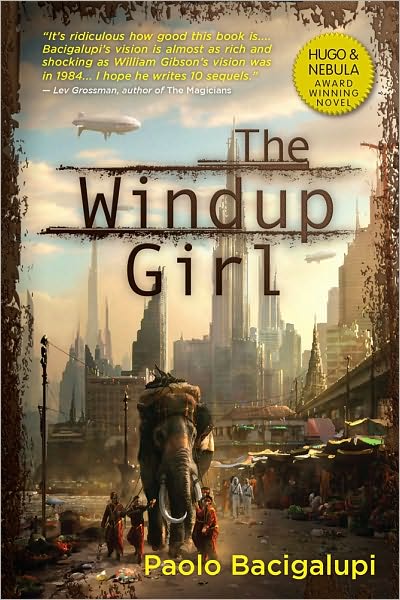 So I just finished Paolo Bacigalupi's The Windup Girl and it's pretty brilliant.
I'm reading the acknowledgments and right up there at the top is a thanks to Daniel Spector.
Well there's only one Daniel Spector that I'd ever heard of and he was a childhood friend of mine from about the 7th or 8th grade through 10th grade (when he moved to California.)

And I checked with Daniel (the Internet lets old school chums get back in touch you know) and indeed, it is he who is thanked.

I have a very specific and formative memory of Daniel Spector. He and I would have been about 11? 12 maybe? And we were in the band room in middle school sitting next to one another. We were both playing brass instruments, Daniel seems to think that by that point I was playing a Sousaphone although I could very well have been on valve trombone.
And Daniel leaned over to say something conspiratorial to me, as 12-year-olds often to. And doing so he put his arm around me so he could lean in.
And I specifically remember at the time thinking "That's nice, he has nothing against putting an arm around a friend. He's not afraid of this while listening to whatever he was saying." And it felt nice and comfortable. And, of course, no sooner had I thought that when some jerkwad immediately called us (or possibly just him, I don't remember) "fag".

And Daniel's reaction to it, in my memory and my feeling at the time, was exemplary. I don't know whether he flipped the other kid off, or just waved his hand in disgust and irritation, but he didn't let the jerky kid affect him.
At the time, and even now, it seemed to me like a very brave thing to do: to resist the merciless thought control of public opinion just to be human.
It was formative because I learned that there were some people who could be your friend and not be deathly concerned about how your friendship was perceived by other people. And that there's simply no good reason boys can't put their arms around one another.
at 2/13/2011 10:29:00 AM