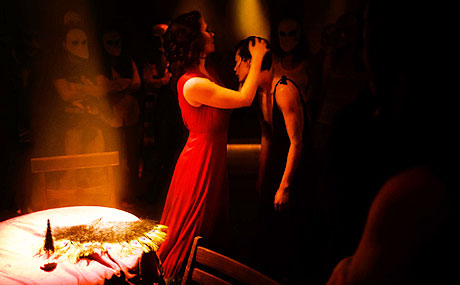 So, I saw the first show of Sleep No More last night. Part of the schtick is that the audience all wear masks, they can go anywhere they like, and they have to shut up. And the group we were in had a couple guys who would not shut the hell up. Like, what did these guys think? That this dance performance piece was going to be like the haunted house at Zeta Beta Douche?
Shut.
The hell.
Up.
Now the fact is that the crowd control in the show was super-pro. First thing that happens is that a group of about 20 are gathered into a room where we get our masks and are told the basic outlines -- keep your mask on, the black-masked people aren't there to guide you but will help you if there's an emergency and will keep you from doing anything you're not supposed to do, and no talking.
So these guys just can't stop laughing and giggling at how awesome they are. Sort of like 30-year-old second graders.
The hostess introduces us to the rules and begins to let our group into the elevator but stops these morons. "Gentlemen, I believe I've made it very clear that there's no talking." while letting us all pass.

OK, look, the same hostess had to talk to me once. My number had been called and I walked up with my ticket and my drink in hand. "Oh darling, no drinks allowed inside. Please, finish at your leisure and go in later." Exactly. Perfectly right. I just bought a $20 champagne cocktail from their own bar, how was I to know I couldn't bring it in? In my own theater we'd made a specific rule that patrons could bring food and drink inside.
So I was ignorant. Then I became learned. The hostess was kind, gracious, and clear. Hospitable. What more could I want? I went back to the bar and finished my drink. It's all good.
But back to the frat boys who couldn't shut up -- who are you guys? Why are you here? You're in an audience with other people in it. Oh. Right. you don't care.

In any case, my first goal after getting out of the elevator was to get the hell away from those knuckle draggers. Because if I didn't, I was going to garrote them one at a time and drag their bodies off to a dark corner where they wouldn't be found for weeks. And nobody would stop me. And as far as you know, I didn't do that.

But either I managed to elude those asses successfully, or the talking to they got worked, or they'd simply been thrown the heck out at some point. They returned not to irritate me again, which was not the result of my having tortured them, killing them, and stuffing them in the incinerator.

Furthermore, I'm not the only one who photographed his kissed mask.