So, we have this dragon script where in a post-apocalypse world this girl runs around fighting dragons or whatever.
The idea that the world would suddenly not have high technology is actually from Elegy Beach. At least, that's where I stole it from.
Revolution has the same notion in it. Electricity doesn't, you know, work anymore. And yeah, you can ask "well wait, then how does physics work?" But it's kind of a waste of time. It's just a conceit. You know, like doors slamming in a romantic comedy. Don't fret none about it.
I don't know about the screenwriting in Revolution though. The dialog is a bit en pointe. Firearms work, it's just that they're illegal somehow and that seems to be enough to keep the local militias in charge.
And crossbows have a lot of stopping power.
Any why not many horses? I know why we don't have any horses -- it's 'cause they're expensive.
One thing they do get right are the gratuitous shots of overgrown world. The sunken church was particularly nice. 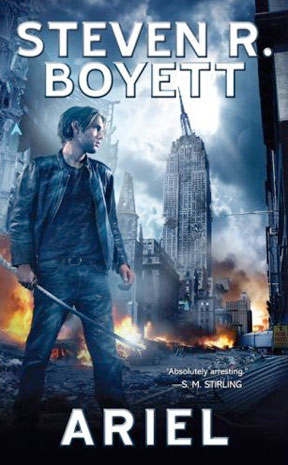 +++++
Hoo boy. As Kevin Kangas pointed out. I bought the wrong GoPro camera. So now I've ordered the right one. Luckily GoPro has a money-back guarantee.

Why not Final Fantasy tech it, where the technology no longer runs on electricty but magic? Then you have more visually interesting stuff to be had.

I mean it's now fx shots overlays of vehicles. Trackmats and AfterFX (or Fusion)

Good point. The thing in Elegy Beach is that magic is the "new physics" so yeah, that works.

Did you just point to my Wikipedia page? (for which I didn't even know I had one?)

(aw, then I clicked on it and it's one sentence...so sad)

I know, right? I'm so envious. Add some more sentences if you want to!

Unfortunately I'm not egotistical enough to add things to Wiki about me. (for the longest time I was so proud because I didn't have a Wiki page, thus proving my lack of ego...now someone has added something about me...)

Though I would like to follow up that one sentence with one additional sentence. Simply:
"Also, he can fly."