I come to zero conclusions in this post.
+++++
For some reason, fake muzzle blasts look... not as awesome as they should. So I'd like to know why. I'll start by the notion of the "performance" with a weapon.
I only watched all of Heat for the first time a few weeks ago. How many times did you re-read the previous sentence to figure out what it meant? OK, it means I just watched the movie Heat.
Anyway, they have a lot of M-16s and variants in that picture.
Then I was looking at clips of Die Hard online. Lots of MP-5's in that picture. Those are the short-ish machineguns that John McClane has.
So here's the thing. Those movies use a lot of blank ammo. The M16's use NATO rounds and the MP5's are 9mm (usually). And for an automatic weapon to shoot blank ammo those blanks basically have to have the same amount of charge in them as real bullets. (The guns themselves are typically modified so they can't accept live ammo but otherwise they cycle just like fully working guns, from which they were made.)
Actors. Firing automatic weapons. 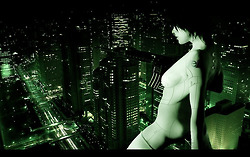 The guns do not kick much. I mean compared to a handgun (which has a LOT of kick), the barrels on those weapons stay fairly in place.
So if you're using a modern machinegun or assault weapon, and putting the flashes in later, you perhaps don't need to shake the gun when shooting. The gun might crawl up the target as the weapon pulls (my dad told me that was a problem with the "grease guns" he trained with in WWII) but the designers and manufacturers of modern weapons go to a lot of trouble to minimize the amount that the gun jumps around when shooting it.
Again this is not the case with handguns, which is why the 22nd Century version of me complains about 21st Century handguns all the time. Plasma weapons do not jump.
So where was I? Oh, it's like that Chekhov thing where drunk people do not act drunk. When you shoot you don't necessarily let the gun recoil the way you might think it should recoil. If you're pretending. To shoot I mean.
+++++
But the question for me is why does the flash look so crappy when you add them in post?
There's all kinds of fancy tools for making the flash be unique and pseudo 3D can make the flash look like its coming from the right direction.

So I don't know. Maybe it's the lack of light on the face of the shooter? We've experimented with using a strobe light. Dumb rolling shutter on the camera makes for frames that are half lit up and half dark. So we don't know if that experiment would have really worked.

Iron Sky, had tons of green screen but still used practical effects with actors (anything the actors touched was real).

Resolution of the movie, the fact your adding a 2D flash element to something that is really 3D, the physics of a handgun or rifle recoil, and human response to a firearms discharge, can effect the product.

Thats why energy weapons are so beloved by low budget scifi, because you can flub it.

video copilot has a nifty tutorial that places muzzle flash on the actor, http://www.videocopilot.net/tutorials/simulated_lighting/

Joe -- I'm (sloppily) arguing that the kinetics of shooting (at least with long weapons) doesn't seem to be the issue that comes into play.
It does seem to be the "3D lighting" required.
psa -- yeah, and we've used that kind of masking a whole bunch. But it still doesn't quite do the trick.
Energy weapons. I can dig it. Sigh...