I keep thinking of this image for Maleyna in Angry Planet. Actually, we have these square lights which are much like the light behind this figure in Dante Gabriel Rossetti's Proserpine.

The physical performance of Sigourney Weaver in Alien Resurrection has some merit as far as our portrayal of androids. I wish I could find the clip where Call first meets Ripley when she breaks into Ripley's cell.

Tomorrow I have to storyboard the robot fight. It would help if I could actually draw. I just finished re-scheduling the entire shoot -- making up for some locations difficulties and some casting difficulties. I got no producer around here and the writer is doing the "Fringe" festival or some such thing -- apparently it involves something called a "play".
Why would you possibly want to be in a play when you could be in a film?
But do note that Mac seems to only be writing horror and robot plays lately.
Now that I'm thinking of it, maybe I just dig chicks in blue dresses. Pre-Raphaelite chicks.* 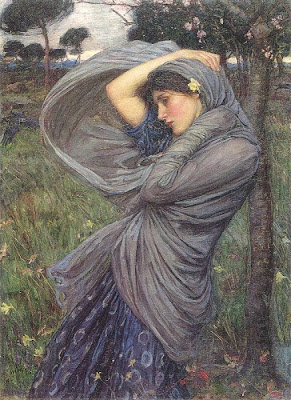 I don't think we need the writer any longer.