Diana came in today (pronounced "dee-ahn-ah") to show her fabulous blue wig and some clothes. The blue of that dress is much like the Pre-Raphaelite stuff we're looking at. I think we may just go with some pieces of cloth wrapped like a sarong and a "wrap" (like the paintings)and her regular hair for Maleyna. But as Charlotte she would go with the blue wig. As Athena playing Charlotte we might go with the white dress or perhaps something more flow-ey and diaphanous. She has kinda sheepy-shoes. I don't think we'll use them, but they certainly are mighty amusing. Oddly enough, she's on her way to Burning Man this week, so she had these clothes all ready! ;-) The beautiful and amazing Mike Kessell is working on the crashed pod. Here it is (in skeletal form). This is going to look tres fabulous when it's done. 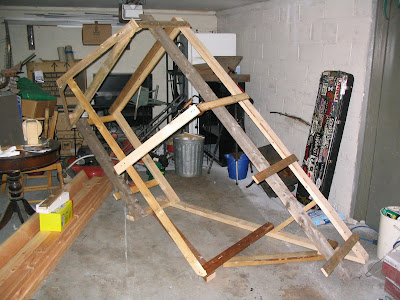 It would be cool if we could get some rocket engines (or just one rocket engine maybe) on the back of it... all burned out and such from the entry into the atmosphere.

Athena pops out from behind the thing, so we only need to "skin" one side of it.

I just hope it doesn't rain that day! Michael has a fantasy that we'll waterproof the skin with latex paint. Right now we're thinking "cardboard" as the skin. I know.

Did I mention we're hoping it doesn't rain?
We also got our first lightsaber today. First we borrowed one from Carrie and Peter (who are so pregnant that they're a day late. But then I got my first one in the mail. They're bigger and heavier than I thought. I mean, they're big for my hands, and we need to have Kathleen swing 'em around! She ain't all that big! ;-) But it'll all work out.
More casting tomorrow...
at 8/20/2007 11:33:00 PM

We still have a ton of that gold see-through fabric that Olja was always wearing in Millennium Crisis. Maybe that can be something?

I am digging the blue wig on Diana. But wouldn't it be nice if Michael could give us a styling tip for it, or 2? Maybe it's just the boots (which are also superfun) but it's looking a bit '60s to me.

Ignore the boots. (Although she really should have some vinyl go-go boots, right?) Michael doesn't really do "hair". We need someone else for that.