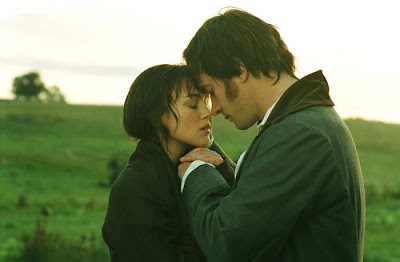 I've seen this picture three times: (on HBO, of course) and it has an excellent screenplay and is really well directed.
Now that I look it up it seems to have won a bunch of awards for screenplay adaptation. Without doubt the story itself is pretty strong to start with, but I feel they did a really good job with it. Deborah Muggach (obviously her real name) wrote the screenplay but IMDB credits Emma Thomson with "additional dialog uncredited". Perhaps I just somehow remained oblivious to this movie when it was in theaters.
It's directed by someone named Joe Wright who's done a lot of (presumably British) TV stuff. There are these nice Altman-style pushes (zooms really) which I've only just noticed this (3rd) time seeing it. They might have mostly been added in post. And the cast is terrific too. I prefer the right side of Keira Knightly's face. In much of the movie however they seemed to prefer a dead-on profile of her left side.
at 8/18/2007 10:20:00 PM

It really is a great movie. My wife loves it for (among other things) Matthew Macfatarse. I like it for Keira and the house they used for the Bennet house was actually in my home town back in England.

It also has one of the longest takes I've seen. It must be around 6 minutes (they do say on the cometary) just one long sweeping take around the dance and we keep coming across little groups of actors doing their little thing. Keira appears several times so must have been running around like a mad woman. Amazing.

They really used the architecture of that house in a filmic way. And that dance scene is beautiful in the way it subtly "isolates" the dancers. The whole picture seems really well thought out. All the bits of "buisness" the actors have as the camera moves around seem very natural.
And some woman named Judi Dench does a workman like job it the movie too. ;-)