How to Get from Here to There 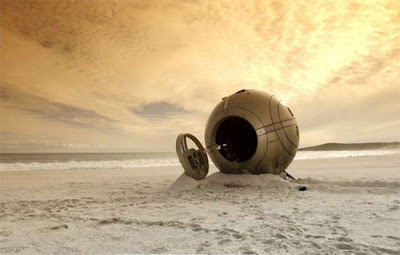 View Larger Map
And here's a picture of a downed pod from the upcoming Starship Troopers III.

The big problem with Starship Troopers is that a big part of the original story was that the characters were in servo-powered armored suits which means you have the same problem as with the moisture-collecting suits in Dune. In the movies, if you can't see someone's face then you instantly lose tremendous amounts of drama (and you can't figure out who different characters are.) They instantly become cartoony, indistinguishable, and typically evil. So when they lose the armor, all you have left is the Greco-Fascism. And of course the movies parody that.

Yesterday I saw a reading of Josh James' The Pleasure Principal. It's an out-of-chronological-order series of scenes about six friends and a very good play. It's pretty well ready to go. What I mean by that is that if you had this script in hand you could cast it and start blocking, there's no "Well we have this thing which needs to be cleaned up, or this other thing which doesn't work, and there's this section where the tone is way off" at that's really hard to get right before you put a play in the hands of actors. It takes a lot of experience to write something so it actually works the first time. But it sure makes the director's job a lot easier.

And hey, if The Pleasure Principal were cut to 90-minutes it would be a good art-house movie too. Sort of a Desperate Housewives meets American Beauty or some such thing (someone could come up with a better description.) It has great characters and dialog - two things frequently missing from art-house pictures. It has an ending. It would be simple to shoot but not boring. What more do you want?


You could probably get a name actress in the lead and shoot the thing with "style" up the wazoo for a million bucks or so and get some good festival play and maybe even an art-house distribution run. If you kept the budget down, you might even be able to make money at it. Of course, most anyone else would say they'd have to make the picture for $2-$6M but I think they'd be spending a lot of money on lattes to get rid of that cash. Lord knows that spending a lot of money on making movies isn't a hard thing to do. The other way to do it is to just shoot the dang thing with your friends in different people's apartments. Then you'd have something to take around to festivals...

And now I'm thinking about the Kensington section of Brooklyn. Looks like there are still reasonably - priced apartments there.
at 1/11/2008 11:27:00 AM

I live in Kensington, and I like it. If you want to check out the area some weekend come by and say hello!