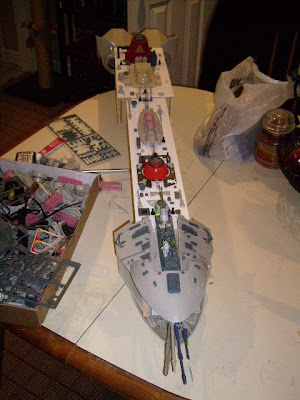 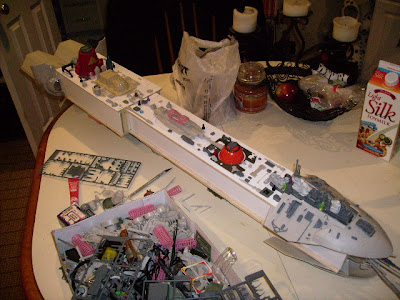 Brian Schiavo is both doing a final re-write on his script but he's also building the spaceship which crash-lands on Necrosis 6.

I'm really interested in seeing how we're going to shoot this model. I even got a macro lens! Hope we don't run into depth of field issues...

I am engaged in mortal battle with Adobe Premiere. Premiere sucks. My decision to go with Premiere was a bad one. I've apologized to all the relevant parties but ultimately I'll be suffering with it the most.

1. It won't output OMF or any other kind of audio format for editing and mixing audio in another program. That's completely unprofessional and makes the program unusable in any kind of pro post-production environment.

2. It boggs down with creating audio waveform displays when you import any audio. This makes the project files ungainly and huge and causes a lot of "out of memory" errors which are simply stupid and bring work to a dead halt.

3. It doesn't even do the one thing it's supposed to do, and the thing which made me use it on the post production of Solar Vengeance. That is the ability to copy and paste from Premiere to After Effects.

As it turns out, that copy and paste is not the most reliable thing in the Adobe world. On a complex project (like, oh, say, a feature film) some clips don't come over on the first try at all. And not all effects come over with their settings in tact. So what's the point?

One lucky thing is that Premiere will render in 32-bit float. So I can output with Magic Bullet Looks and not lose information (I think).

Definately go with FCP in future (it will happily work with .tga files).

Adobe just don't seem to be able to get Premier working right. I've tried to use it on and off since version 4.2 right upto CS3. All have dissapointed me. I was an Avid editor for 12 years and now use FCP.

Adobe are either just not prepared to spend the money on decent R&D or they just really don't understand what editors/filmmakers want and expect from a supposedly professional product.

Anyway, rant over! Very good luck with your film!

Thanks! Yeah, I don't get it. Clearly nobody at Adobe has actually edited a feature before. It's nuts.

premiere elements sucks, too. hell, vegas will run on a single core/512mb ram machine like butter, while premiere elements acts like it's thinking about something, but never figures it out. i feel like i got ripped off.

I agree, I just spent an hour waiting for Premiere to export my movie to a MOV file, only to be told after an hour of my computer being bogged down that I am OUT OF MEMORY.... um...Earth to Adobe programmers, could you have a check available space feature prior to trying to save a movie to save users wasted time because your software likes to BLOAT up movie files... how does a 5MB movie that has a minute edited out of it end up being over a GIG?????

someone needs to get beat up for this idiocricy. Adobe SUCKS!

It's all very strange, because After Effects works pretty well. It's actually the most stable video app we have.

But yeah, jump ship on Premiere before it's too late.

Yes I just downloaded the trial of Premiere and couldn't get it off of my computer fast enough !! That program was even slow deleting itself off my computer. Never again !! I am sticking to Sony Vegas. The controls were ridiculous too. Anyways, I typed "adobe premiere sucks" in the search bar and this came up, good luck with your projects.

We actually used to use Vegas fairly often. I especially needed the TV effect Vegas had but now Final Cut has a "Bad TV" filter which we put to use on holograms more often than we'd like to admit.
Still -- steering away from Premiere...

I was looking into Premiere because I figured it would work a little easier with AE so I could do some rough cuts, throw in some effects and whammo, render it. Nhhhhhh. After about 5 mins. of fiddling around I said screw that. Uninstalled. Something I could have done in SV in like 2 seconds couldn't be done in PR in 5, I don't have time for slow, LOL.

oh my... tell me about it!!!
Premiere (elements 4) is so user un-friendly that they put all these 'preset' custom export formats... but GOD FORBID you should want to use a nice multi-threaded codec!!! Heck no... no dice. Then GOD FORBID you should want to export a movie at 5fps, or do any other "crazy" unique thing... nope... even in the "advanced" settings they've helpfully grayed out any useful settings. It just sucks. I bought it to quickly rotate .movs... and to do even more advanced stuff like perhaps a voiceover of a 5min vid. tut... Premiere just sucks. And their forums... people are just jerks to you there. And last I checked, if you don't know HTML... forget posting an image. :roll eyes: You can't even start a custom sized project... you are STUCK TO THEIR 4 CHOICES... retarded.