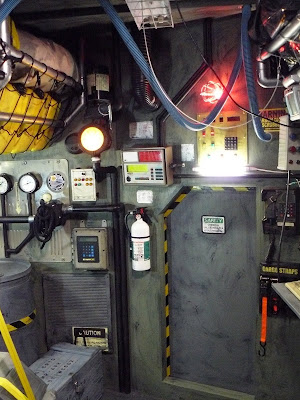 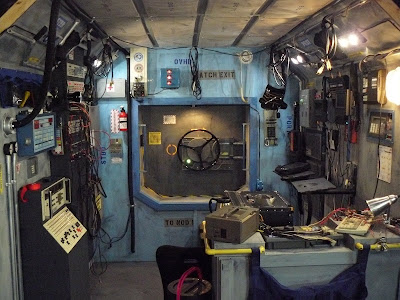 Visited Julia and Jason, the good folks down in Forked River who are making the webcast series Venus Rises.

These pictures are taken with only the built-in lighting in the sets.

According to the metadata in the jpeg file the pictures are taken at f2.8 1/8 second at an equivalent ISO of 800.

Well you can see I can't do math and conversions well in my head. Or on this blog. In any case, the practical lights won't blow out that hard because they'll be down some number of stops. We probably wouldn't want the background to be that bright anyway. I'm presuming these pictures on their site are not from the DVX100 they use but they could be. I'd rate the DVX 100 camera at most to be about a 320 - 360 ISO on a good day.

Even when I get a new adapter for my HVX we'll be shooting about 200 ISO or so.

VERY nice set, heh-heh. I can see that in a movie, you bet!

That is, indeed, an awesome set.

some long hours went into assembling those sets!

There are more set pics up at http://gallery.venusrises.com