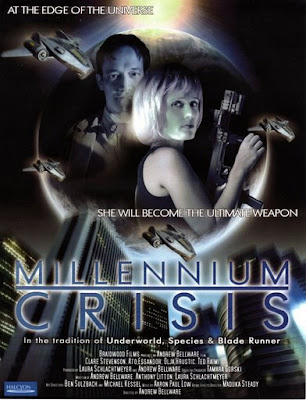 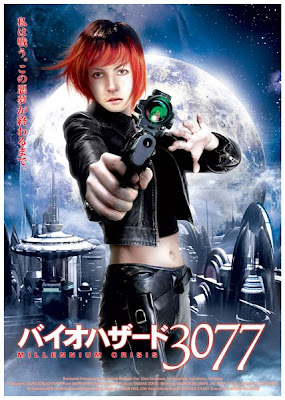 Whenever I look at this Japanese DVD cover to our movie Millenium Crisis, I think "I wish we'd made that movie."
Bill Cunningham over at DisContent asks:
"How would your movie have changed if you had either of these two pieces of art as your "inspiration" before you made the movie (or even wrote the script)?"
This is a question we've asked ourselves a lot actually.
The image of the woman in the Japanese version of Millenium Crisis (aka "Biohazard 3077") is quite compelling. She's not a passive character, she has specific wants and desires and she's taking action to attain them. We don't know exactly what those are just by looking at the art, but we can tell that she's strong and motivated (and cool).
And she should have been all of those things (including cool) in all the scenes in the picture.
When we were originally writing the movie we became concerned that the lead character was too passive -- her wants were not as clear as they should be (we had help from Paul Cooper at Hollywood Working Writer) and we did a rewrite that worked well literarily, gave the character a good arc, and really helped the story. But if we'd thought of her as that rockin' character in the Japanese art I think we would have gone even further in making her even more active and... well... cool.
And we keep hunting for that thing in a movie -- that thrill you get from looking at the DVD cover -- and actually making that movie.
--
Sometimes you can look at a piece of art for a film and say "Yes! That's what the movie is." Of course, it depends on what your meaning of "is" is.
Take the example of Indiana Jones and the Raiders of the Lost Ark. It's about a guy with a whip and there's this giant boulder chasing after him. That's what the movie is!
Well, it "is" about that in one sense, and it "isn't" in another. The story is much more complex than that. It's about good and evil. It's about love. It's about doing what is right rather than doing what is easiest. But if you were making that movie you could get easily lost down one of those paths. You could, for instance, start thinking waaay too much about the theological implications (which are huge) of the Nazis having the Ark of the Covenant. And you could start making the scenes all about how and whether God could end up against you and each scene could end up being about the idea of good and evil and how Indy is like Adam who has been chased from the Garden of Eden and is now trying to find his way back to God through the Messiah and... and you'd have a mess.
You'd have a mess because you forgot that in each of those scenes where (in some way) it may be about God and Love and Evil and Goodness, it's also about this freakin' cool guy with a whip and a hat being chased by a boulder!
--
When making a feature it's very easy to get lost. You can shoot some scenes, maybe they're pretty. Maybe the actors are in the moment and the details are exquisite and the emotion in each scene is perfect. And still -- it's really hard to tell if the movie itself is working. But having a single picture in your mind, a picture of what is the movie about, could be very helpful in keeping focus. I think that's how it could help to have the title art first.
at 10/20/2008 08:48:00 AM

Don't judge a book by it's cover. I'm looking at this from a consumer view point rather than the film maker. It is amazing how much preconceptions are altered by cover art. If I saw the two dvd's in BestBuy next to each other, I would probably pick up the darker one and skip over the Japanese flavoured one. This is probably partly cultural, I THINK I don't like Japanese films. Maybe it's just a preference. I like the darkness and the looming planet. Although I do think that it would have been a better cover in either version had the large spaceship from the end of the movie been on the cover. ;-)

Actually, my issue with the Japanese cover is that it implies that the movie is animated.

And you may be right -- it may be cultural which is why BestBuy went for one cover and the Japanese went for the other.

Great post, Andrew. The hardest thing about making a feature is keeping the tone consistent, and I think you've done a good job explaining (at least part of) what that entails.

Thanks Chance. I think I could have named the post "Making Features is Hard". ;-)