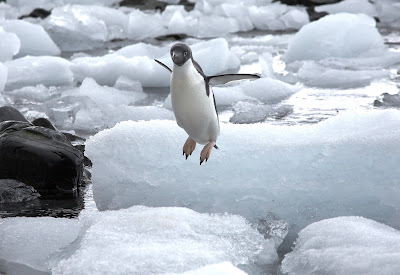 This post is strictly a set of meandering notes I've written over the last couple weeks. It makes little sense to me. It makes no sense to you.

But at least you have this hover penguin.

Magnolia is releasing six genre pictures as part of the Six Shooter Film Series. They're actually calling it a "labor of love". Does that mean they don't expect to make any money with it? Or does a theatrical release assure a Blockbuster placement and they figure they should break even on the series with the possibility of one of the pictures being a hit?

Bill Cunningham is writing The Pulp Filmmaking Manual.
I've been thinking about what that would be like.

And I'm thinking that perhaps "The Pulp Filmmaking Manual" could be alternatively titled "Making Movies That Don't Suck" because I think that by and large the rules are the same whether it's pulp or a costume drama.

Things like "knowing what the movie is about" is what everyone should be doing. The better art house pictures do that.*

In other words, I'm not entirely sure that the word "pulp" (as used by Bill) is substantially different from the word "good" when describing movies, or theater, or novels, or what-have-you. By and large one has the same issues when making art house pictures as when making genre pictures. I mean, except for the fact that you have a prayer of making your money back when making a genre picture.**

Certainly in the production post/production stage you're performing the same activities. Creating the DM&E tracks are the same pain-in-the-butt activity whether you've made a horror film or a domestic comedy.***

--
If I were really pretentious I might compare Macbeth to A Swell-Looking Babe, and The Odyssey to Star Wars. Wait, I am pretentious. So I shall. Well, at least I'll talk about the classic stuff as though it were genre entertainment. Let's look at these three Shakespeare's from a genre producer's perspective:
The top of Hamlet is front-loaded as a ghost story. Act I scene i -- a couple guards on a battlement are scared out of their wits, almost kill one another, and then meet up with the dude who's point of view the show is of (Horatio). Then a ghost shows up and creeps everybody out the wazoo. This is a classic front-loaded opening of a story. A nice big bang to get you started. I like it, kid. Now tell me there will be a good fight scene at the end...

Macbeth? First up is the end of a battle (because doing the actual battle would be too expensive), and then? Witches! Make it short, Sweetheart, and gimme a beheading at the end and we gotta deal...

I've also been thinking a lot about using books and screenwriting guides and applying them to movies and I thought of paraphrasing, inverting, and pummeling Chekhov Turgenev Tolstoy:

And we tend to look for the patterns which indicate "bad movie" when we're developing pictures. That's why we make all kinds of rules about what to do when perhaps what we actually need is to simply do our pattern-matching with what not to do.

Uh, where was I going here? Something about a font I like...

*The better arthouse pictures are pulp. See Brick.
**OK, so there are more alien androids in pulp, but only barely.
***Except that you probably won't have to make DM&E's for your domestic comedy because you'll never get overseas sales. OK. Snark = off.
at 11/15/2008 01:53:00 PM