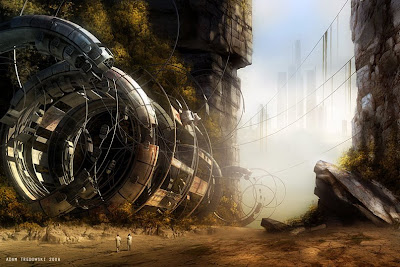 I've completed a pass on the dialog and sound effects edit of the first reel of Alien Uprising. We're waiting for a couple pieces to arrive -- a bit of dialog, a hand clap, and... oh... all the music... and we're ready to go. (I believe we're even set for all the visual effects in reel 1.)

At one time Mobieus had worked out storyboards for a movie version of Dune.

This art is by a fellow named Adam Tredowski.

Mozz says he's going to give me a complete script tomorrow. He's a writer. So he's lying. But it's nice to know that one day I'll maybe have a first draft of something. Being a producer is hard. Being a producer when you don't pay anyone is harder. We have to make movies which gross at least $120K worldwide (and on a regular basis) for us to actually pay anyone upfront. That's what I figure at least.
at 11/15/2008 06:04:00 PM