So I saw the movie "Skyline". It's shockingly similar to our "Day 2". It even has titles of "Day One", "Day Two", and "Day Three".
The movie was very close to being good. The biggest problem for me was the structure. They had a good idea where they could keep the characters together inside an penthouse for most of the movie. And when the very first shot is the aliens descending from the sky you might be forgiven for thinking that you're going to be going for a fun ride and avoid that whole boring exposition of your characters where they mostly don't have any dramatic tension. That is until the title "15 Hours Earlier" comes up.
Save the Cat could have saved the picture. One thing you need for a movie like this is the "half man". The main cast needed to run into a survivor -- someone who's seen the dark side. They actually do end up with a half man, and it's sorta interesting, but it's a 3rd act element rather than the 2nd act element you'd expect. 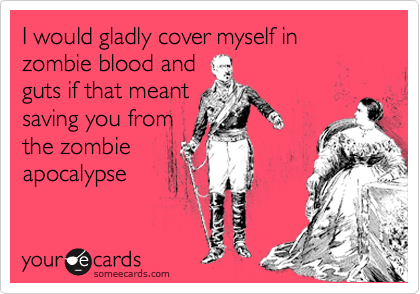 There's also a bunch of stuff they establish -- like a telescope and a camera -- which don't really pay off. It's not that critical that they have them. They could have just looked out a window which, in effect, was what they were doing.
The aliens look nice.
at 3/27/2011 10:15:00 PM

INcredible FX for 11 million dollars, but that script was HORRIBLE!

They started making declarations out of nowhere: "The aliens aren't over water! We'll be safe if we can get to the water!"

Uh...what? Where'd you get that? From Signs? 'Cause I didn't see anything like that.

And then characters like, "We gotta get outta here!" but it looked a lot safer inside than outside...

Obviously the directors were visual effects supervisors.
Yeah, they established, and didn't establish, a lot of stuff in that movie. It's like they shot the script that was between rewrites.
From a Save the Cat standpoint (or at least a Blake Snyder Beat Sheet standpoint) the debate section was in the wrong place, and then they had the debate a SECOND time (it was the same debate about leaving) toward the end.
It was kind of a mess.