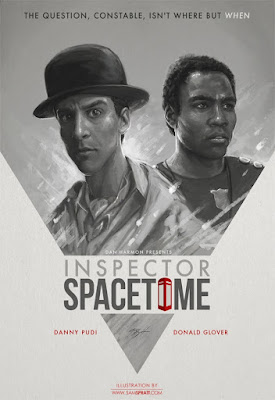 I'm that guy who thinks Community is the best thing since sliced bread.
I only started watching in Season 2. So last week I went back to Season 1 only to find that at one time it was the good-looking white guy's show. I would say the show is actually Abed's show.
The entire show is a parody of television. Which, of course, desperately needs to be parodied.
There are a lot of things established at the beginning of the series which aren't part of the characters later on. Like the fact that Troy is a jock. He's totally a nerd by the middle of the second season.
This is, of course, another indicator that it's Abed's show. In fact, there are a whole bunch of indicators that Abed actually created all the characters and all the events are playing out in his mind. But we don't have to go there.
What I really don't understand is how they manage to take the serious moments without being embarrassing. That's usually a huge failure in sit-coms but somehow they always avoid the trap.
The pilot had some boomed sound which was actually on the edge of being unacceptable for broadcast quality. But other than that one episode the show is one of the best - sounding shows on television. The musical numbers do all the things right that Glee does wrong. The vocal sound doesn't "stick out" the way it does on Glee, instead the vocals match the dialog naturally. Of course I'm the dorkus who would notice such things but it really does make a difference.
at 1/16/2012 04:00:00 PM

Netflix, to my great dissatisfaction doesn't carry season 2 yet. So I have yet to see.

I just ordered from Amazon -- a used copy. Hope to get it this week.

Yeah, "Community" is pretty good if you like stuff that is awesome.