We actually had a student go to the hospital. He popped up in the water and did the distress wave and shouted. Everyone was afraid he got decompression sickness because the story was he was feeling sick and couldn't breathe and bolted up to the surface from 70 feet. However there was a doctor at the hospital (so I heard later) who was a DAN doctor and who said that the student was not suffering from any decompression injuries. So apparently he really did just get sick. Maybe he swallowed air? I wasn't in the water when it happened. And oddly there was a Rescue Diver course being taught about 100' from where he came up. So we (sitting at a picnic table some several hundred yards away) just presumed he was part of the course when he signaled his distress.
But they sure got to him quickly.
++++
I lost my cheap dive knife. It popped off my BCD. Maybe I'll find it tomorrow. At least it got used a few times before it jumped into the deep.
++++
I totally lost my dive buddy on one dive. At the same place I'd lost my buddy on my last Open Water dive. Seriously, that boat is cursed. 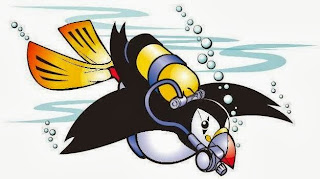 Anyway, we're descending to the sunken boat. I'm being good and looking behind me and giving the big "okay" sign. We get to the boat wreck and... he's just gone. I go up to the instructor. I make the "buddy" signal with my two index fingers and then a "duh, I dunno" shrug. We looked up, we looked down. We looked everywhere. No luck.
So I figure I'll at least do the exercise I'm supposed to do at the sunken ship. I'm supposed to measure the length using kick cycles and figure out how tall the boat is by using my depth gauge down at the keel level and then all the way at the top. When I get down on the bottom I see something... a brand-new weight pocket. I pick it up. It's got a weight in it.
So I bring the pocket up to the deck of the wrecked boat and show it to the instructor (we're still at about 60' depth here). I figure that we should probably just leave it on the deck of the sunken boat and whomever lost it would find it.
You'll note that I'm not putting 2 and 2 together here.
The instructor and I do a little search for my dive buddy. We even look inside the wrecked ship (without entering into it). My instructor isn't terribly concerned. We give up the search. Instead we swim around and I just sort of follow him and another pair of divers and we look at some fish.
So. Who owns a new BCD and has barely ever used it? That would be my dive buddy. Whose weights were not secured properly? I'll let you guess that one. Whose weights fell out and he bobbed up to the surface, unable to descend again?
The water at the quarry is mighty murky. At least it tastes good. But yeah, you can't see a diver on the surface if you're down sixty feet. You can sorta see the sunlight.
at 9/21/2013 07:04:00 PM