The mic clip on one of my Ear Trumpet Labs Edwina microphones took a complete break with reality. Actually, the brass knurled threaded piece which was glued into the clip just let go. Twice.
This means I managed to drop the same Edwina twice onto the kick drum about 5 feet below it during the same rehearsal.
Such actions dented the grill. I don't really care what happened to the kick drum.
Lily suggested that I open the mic and push the grill back out from the inside. Which was very smart.
The microphone unscrews in a fairly intuitive manner but then once you've got all the screws undone it sort of explodes in your hands. Now note that my initial plan (before Lily set me straight) was to take a small needle nose and pull the basket back into shape. But there's pop screens built into the mic which make it easier to push the grill back from the inside.

The element itself didn't look damaged. And the recordings we did last week after this reassembly was complete didn't sound damaged. They sounded remarkably good actually. 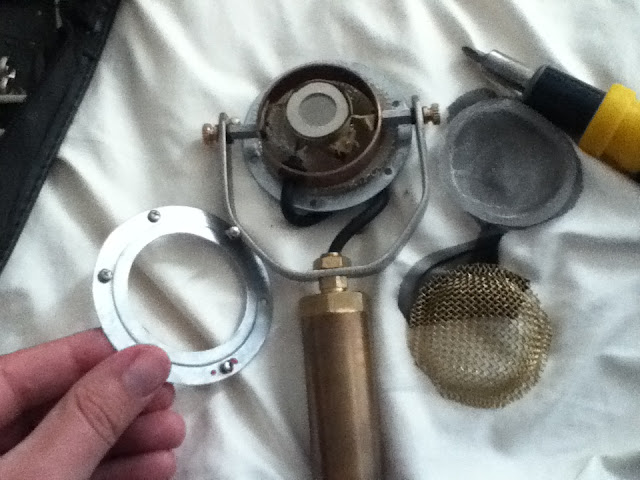 Putting it back together required a bit of a balancing act, but it all fit nicely.
These are very sweet microphones. I love them on many things -- drum overheads, guitars, acoustics, vocals.
at 9/02/2013 02:16:00 AM

Very nice job, Andrew! I have a little jig to hold things when assembling the screens and bolts - it is indeed a bit tricky without. Glad she held up fine - I have seen several other similar cases, and a full drop has yet to do any more damage than dent the screen. And I see you've cleverly added a little directional indicator to the front face. I'm debating what kind of mark I might add as part of the design.

Ha! Yes. That red nail polish is something I've been marking all my gear with for... good heavens... almost 30 years now (it's the same bottle).
More than that I put ONE dot on one mic and TWO on the other -- just so if I ever need to tell them apart, I can.
Yup. Held up fine after two dead drops (not even mic cable to slow it down).
Some superglue on the mic clip should prevent that from happening again. ;-)