So this Dead Residents movie opens inside a spinner. Yeah, I know, the script doesn't explicitly say the police car is a spinner, but we all know better don't we?
The script, again a brilliant screenplay by Steven J. Niles, is written as a POV tale of woe and hardship as a police officer and her Robocop-esque partner try to track down a terrorist who unleashes a zombie virus in an apartment building. Which is as awesome as it sounds.
In fact, the idea is that the movie is told in flashbacks from the robot's onboard camera. Which is a stunning idea. And sometimes stunningly difficult to figure out how we're going to shoot (we see the robot looking at himself in a mirror... I'm still working on that.) 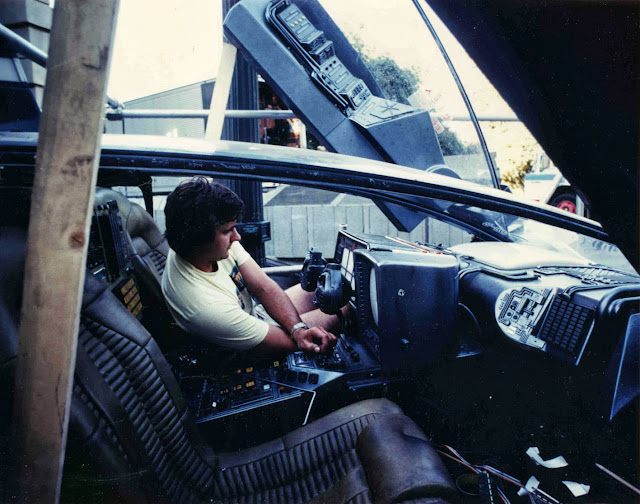 But remember, we just need to see a POV from the front passenger seat. We need a mirror outside of the car and we need some kind of panel on the dashboard. Most of the complex details in the interior of the Blade Runner spinner are on the side panels and in the center console.

The big piece of the actual car that we see in Blade Runner is the flatscreen display on Adama's side of the car. That center monitor is interestingly situated such that the driver and passenger can't actually see it, but it photographs great doesn't it?
And interestingly real police cars have a computer typically mounted in the center console nowadays (but, you know, made so that the people in the front can swing it around to look at.)
In any case, the vehicle is stationary for the entire shot inside it. And I was going to have someone stand there with a hose so the "rain" obscures the visibility through the windshield but some gianormous light would punch through and make some interesting patterns on the face in the car.
So what we're staring down the throat of here is to shoot in a car or van with a hose or two on the windows and maybe our blue police light flashing. Uh. Anybody know where our blue police light is?
And so that means we want to put a flat screen monitor on the dash with some sort of display running on it. The display would be what the vehicle would see when it's stopped. Could we put the display on in post? Well yeah but I really don't want to motion-track a handheld shot with camera which has a rolling shutter and I super don't want to have to rotoscope the image if anyone should pass in front of it.
at 9/28/2013 10:23:00 PM