Pleasure for the Imperial

Page 85 of PADI's Adventures in Diving Manual, which is the PADI "Advanced" diver manual, has a pretty egregious typographical error. 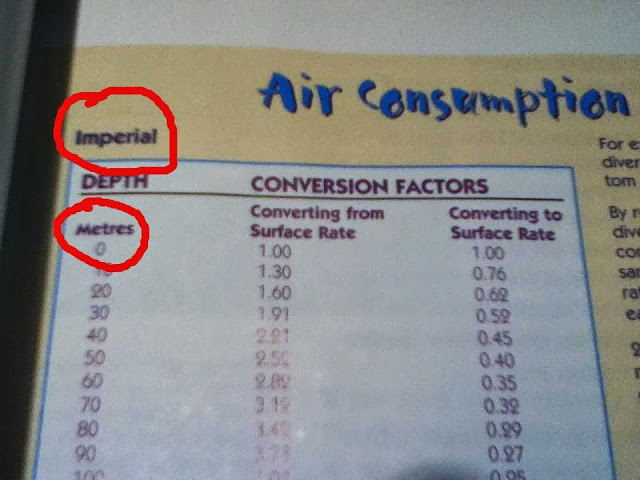 The column heading on an "Imperial" chart is in meters. Now, through careful observation and calculation one might understand that the numbers in that column must indicate feet. But really, this is a space-shuttle crashing bad typographical error. And the book has been out since 2010. You'd think they'd hand out an errata sheet with it.
I like diving with Imperial units. There's exactly one substantial reason to like Imperial rather than Metric. That is: the safe ascent rate in SCUBA is one foot a second. Nice and easy. 1'/sec. With Metric it's like 3 meters/10 seconds or some such thing. I don't care. It's dumb and there's no way to just think it rather than looking at your dive computer. One foot per second is the speed I need to know. I prefer to work entirely in Imperial because of it.
Yeah, I wouldn't care if the pressure in the tank were in cubic litres or whatever. But depth is gonna be in feet baby. There. I said it. So be it.
at 9/13/2013 11:27:00 PM