I'm in the middle of getting my "Advanced Open Water" certification from PADI. We did the pool work yesterday and we're going out to the quarry at Dutch Springs, PA this coming weekend.
As anyone will tell you, there's nothing "advanced" about the AOW certification. It's really the "Open Water II" class and is designed to be taken immediately after taking the regular Open Water class.
I can see why they do it that way though -- they want to get divers certified and not killing themselves as soon and as inexpensively as they can. So with the Open Water class they get you through three or four nights in a pool, six chapters in a book with a test at the end, and four dives in "open water".
With the open water certification you can get your dive tanks filled. You're not super-duper dangerous. You aren't supposed to go below 60 feet. But you are just barely a beginner.
And you know this. Thing is, as far as I can tell, most everyone feels clumsy and not terribly competent after getting their Open Water certification. And one's first reaction to the notion of going on to the Advanced class (at least mine, and from a couple other people who voiced similarly) is "oh I'm not ready for Advanced, I need some practice first." And as much as the instructors tell you "You can go right from Open Water to Advanced Open Water the next weekend" it's hard to believe. But it's totally true. 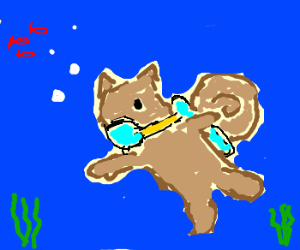 With the "Advanced Open Water" you start out just a bit more comfortable in the water. They're big on working your buoyancy (that's one of those words I can't ever spell on the first try) and compass skills. And you get to spend more time underwater with an instructor, which is always a good thing. For instance, my instructor said that I was a good candidate for ankle weights: so yesterday I went out and got a pair of them. They're 3.9 pounds of weights and they strap around my ankles (as you would expect ankle weights to do).
And snorkeling around the 5' deep pool at my parents' retirement place indicates that yeah, ankle weights work great for me. It's harder to move my legs -- but that's because my fins spend more time underwater. So ironically more weight = I go faster.
My goal is to go on through the Rescue Diver course. With the Open Water and Advanced Open Water I'm at less of a risk of killing myself. But with the additional training in Rescue I figure I at least won't be the problem in the water and may help from other people killing themselves.
+++++
I'm surprised at how useful a compass is underwater. The courses PADI teaches really makes an effort to introduce you to the compass and get you used to working with one. They start you off in the regular Open Water but they make you use 'em a lot in the Advanced.