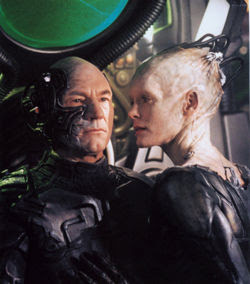 I don't like it when the makeup base on a (typically) actress' face is much lighter than on their neck.

I'm not talking about this image however. Makeup is perfect.

But in more interesting news:

From Variety:
"In 2006, After Dark Horrorfest became the first film festival in history to break into the top 10 at the national box office, grossing over 2.5 million dollars, on only a quarter of the screens of any other film in the top ten that weekend. The “8 Films to Die For” package, released on DVD by partner Lionsgate Films, has reached great success with over 1.8 million DVDs in circulation."

OK, so there's some weasel words there like "in circulation". But otherwise that's interesting. What do you think Lion's Gate gets for each DVD? $7.25 or so? I dunno. Maybe more? Maybe less because they're a box set?

Now oddly, Boxoffice Mojo does not have stats for Horrorfest 1 (the 2006 Horrorfest) but they do have stats for After Dark's other releases including Horrorfest 2. They say that Horrorfest 2 made $450K over its first weekend. Those are estimates. Bloody Disgusting says they made just over $500K.
at 11/13/2007 01:59:00 AM

Email ThisBlogThis!Share to TwitterShare to FacebookShare to Pinterest
Labels: Distribution, Other people's movies