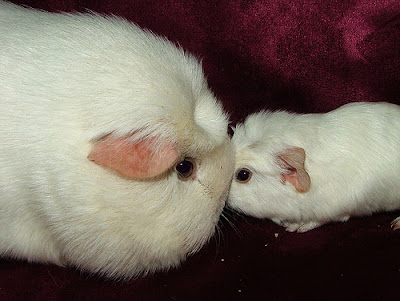 Inflating a pig. From cuteoverload. Of course.
First you inflate the pig. Then you float across the meadow. Easy!

The following is my rant during a conversation with Brian Schiavo:

EVERYBODY thinks the movie is about them. The writer thinks it's all about him, (I mean, except in Mac's case - I still have no idea what he thinks), the art department, costumes, makeup, actors, sound, music, picture editorial, all think it's about them. Don't forget the camera-freakin'-department, they've convinced most people it's all about them, and dear Lord -- the Director. The idiot Director thinks it's his movie... but the fact is it's not about any of 'em.

It's about the movie.

We do two things: beat up on people on pricing, and say the word "no" a lot.

Here's the way conversations between department heads and the producer should be handled:

"This movie would be so much better if..."

I was halfway through your rant thinking, "Duh. It's about the movie."

Thanks for agreeing with me.

No problem. Whenever you need to find someone to agree with you, just gimme a ring! ;-)