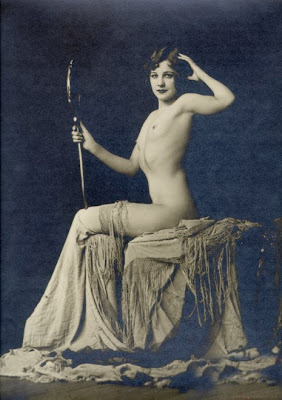 OK so we, or I should say Pandora Machine, are in the sci-fi movie business. The reason we specialize in science fiction is because that's a market with relatively few other producers compared to the number of buyers. We didn't know that when we'd made our first couple o' movies, but it turns out that compared to the straight-up horror/slasher market (for instance), the giant crash in sales over the last 18 months didn't affect us as much. Besides, I like science fiction.

Now what's funny about the market is that by far most of the producers out there make movies which cost them way too much. The manner in which they cost too much can be in two ways: either they get some rich person who doesn't know, or doesn't care that there is no feasible way to get his money back from a particular picture (which is how the bulk of the art-house film industry works); or it's one of these "we only spent $400 making this movie" to which you can say "yeah, but it's a 7-minute short and it took you three years to complete it."

So many of our "competitors" have product in the market which they absolutely and positively cannot make money with. And they typically don't care. For someone like me that's a real "Yikes!!" because I absolutely need to make money 'cause I gotta pay rent.

And it's all, of course, because of the fact that we're in a "glamour" business. If we, for instance, made handrails (ahem) we wouldn't have these problems. Of course, we'd also be making handrails, so that's the tradeoff.

Now on the other hand, because it's a glamour business, there are a lot of people willing to do a lot of work for us for free. I'd love to say "that's no way to run a business" but sometimes you just have to. I'd love to be able to pay people some sort of miserly pathetic salary, but until our pictures start making around $100K I just can't.
at 7/08/2009 11:20:00 AM